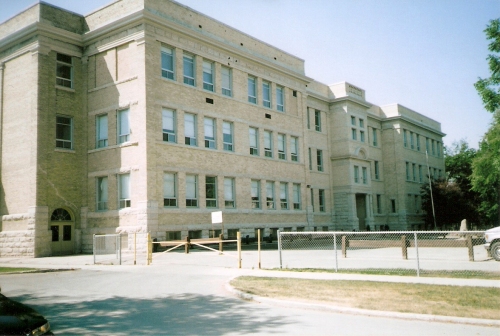 École Provencher’s history extends back to the earliest Catholic school in the Red River settlement. About 1818, the first missionary in the region, Father (later Bishop) Provencher (below), used his chapel as a 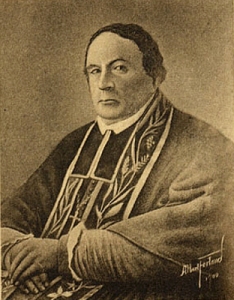 school where he taught boys the four Rs: reading, writing, ‘rithmetic and religion. In 1844, the Grey Nuns assumed responsibility for the school. Ten years later, Father Taché asked the Brothers of Christian Schools to take over the boys’ education in the bishop’s residence while the girls attended school in the Grey Nuns’ Convent.

In 1886, the Oblate Order, who had taken over from the Brothers in
1860, erected a fine Colonial Revival style two-storey wood frame school (below) with an unusual open arcade entrance and stairway 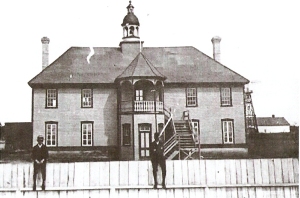 under a peaked roof. The hipped roof of the school sported a lovely cupola featuring another open arcade, a substantial pinnacle and a school bell. This school, teaching bilingual courses, was located in a wooded area at Taché and Provencher. It shares its genesis with St. Boniface College.

When the Grey Nuns resumed instruction of the boys in 1886, the school’s name changed to l’Academie Provencher. The Schools’ Act of 1890, brought in by the provincial Greenway government, created one school system administered by a Board of Education with its own minister. After this, the Grey Nuns handed jurisdiction over to the St. Boniface School Board. In 1899, Bishop Langevin invited the Brothers of the Marianist Order to staff the school.

The Marianist Brothers offered excellent education and a variety of extra-curricular programs including a cinema club, savings bank, bowling and school newspaper. 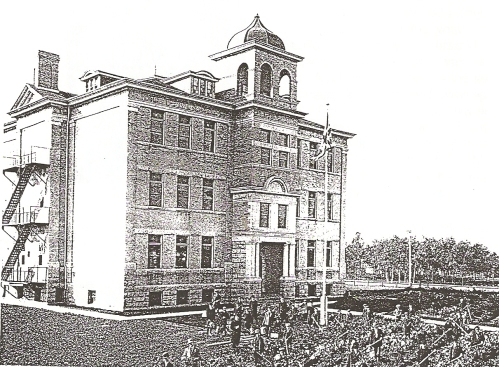 In 1906, the School Board constructed a school at the site where École Provencher stands today on Avenue de la Cathedrale. It was a modest three-storey brick and limestone building, featuring an entry tower surmounted with an elegant ogee roof. The central 12-room portion of the current building is the original 1906 section (above). Note the students working in the school garden. 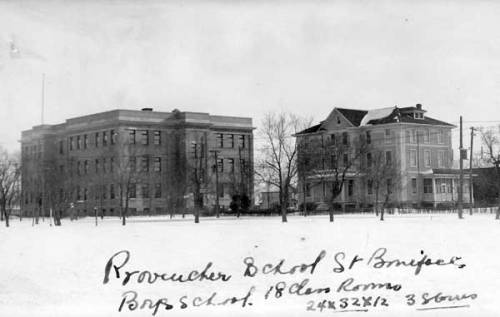 In this picture (above) taken between 1912 and 1924 you can see the original structure (far left) with the west wing (centre) added on.

The first principal of the new school was Father Joseph Fink (left), whose portrait hangs in the school hallway. Popular and progressive, Father Fink initiated a horticultural project using garden plots in front of the building.

To this end, on the third floor, two of the classrooms have large multi-paned skylights, now covered over by the metal roof. Originally, these two rooms were used to grow bedding plants and seedlings for the school garden. The skylights created a greenhouse effect in the rooms so students could learn about horticulture. They would have been very bright rooms with four big windows plus the skylight in each.

The basement of the school had shops for teaching industrial arts. Dating back to 1911 this could be the earliest shop class taught in Winnipeg. By 1915, the school offered a complete high school curriculum. 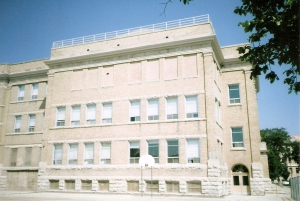 was used as classrooms. It is noticeable from the outside by the bricked-in windows (right). A row of elms was planted along the front of the school in 1909. Some remain today.

In the middle of the night on January 4, 1923 École Provencher caught fire (below). By noon just a gutted shell remained. The St. Boniface School Division lost their offices, which were located in the school. The Board quickly rebuilt. The school we see today opened January 14, 1924, a year and ten days after the fire. 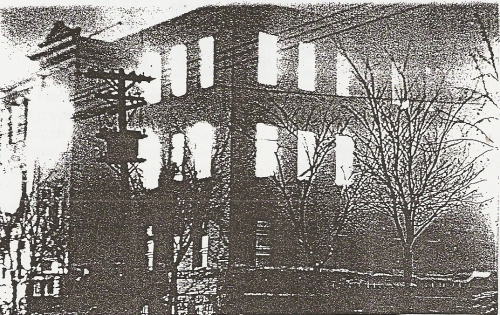 Post-fire, the school increased in size with the addition of the east wing. The tower lost its crowning roof; the roofline lost some of its pitch and its dormers, replaced with a tall plain parapet above a tiered cornice.

I should mention the difference in the building’s coloration in my pictures. École Provencher celebrated its centennial year in 2006. In the spring, there were tours of the school, displays and tents for special events. One of the major plans and a most fitting centennial project was sandblasting the façade, restoring it to its original condition. The northwest winds, which have buffeted the brave face of the building for over 110 years, brought in extra smoke and pollution. The other three sides are not as dingy as the front though they benefited from the cleaning. École Provencher’s splendid façade is now even more striking since the cleaning. I shot the school before and after the sandblasting which accounts for the variations. 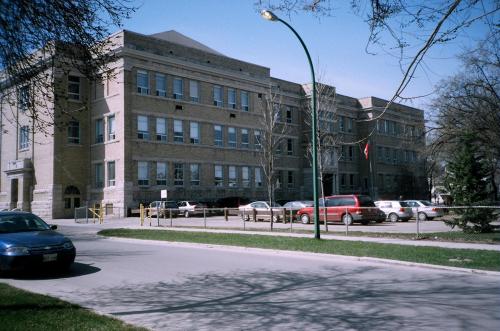 As you see in this pre-sandblasting picture (above), the 1924 addition of the east wing created a fine balance to the façade of this massive and stately structure with its five bays including the end wings. The façade and rear are symmetrical without pilasters. The pilasters begin at the corners and offer expression to the sides with their elegant doorways. The rear facade of the school (below) is a modest echo of the front. 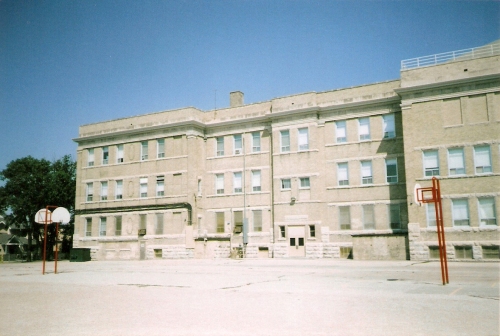 École Provencher combines Second Empire massing with Classical Revival elements to create a feeling of stability and potential. The buff brick is laid in American bond, every sixth row is headers. It sits on a rough limestone foundation; the same stone used for lintels, sills and the belt courses around the building. Smooth limestone expresses the more refined detail on the school. 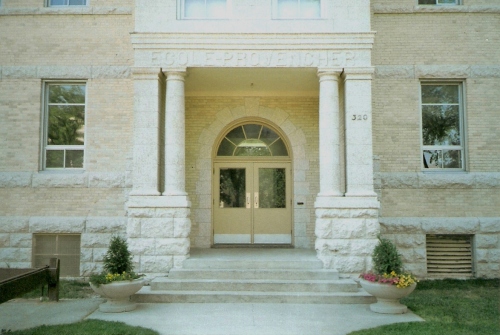 The front entrance pavilion (above) uses round and square Classical columns of smooth limestone to contrast with the rough limestone of the foundation and to welcome you into an enclosed porch. The double doorway into the school is surmounted with a sensual arch filled with a segmented window and accented with an outer arch of smooth limestone. Over the entrance the school’s name is carved in smooth stone. 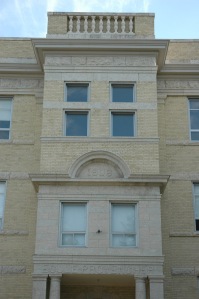 As you proceed up the entry tower (left), a section of smooth limestone is broken by a pair of rectangular windows. Above an elaborate arched alcove houses the carved datestone – 1906. The next brick section has four small windows with limestone lintels. A course of rough stone grows into a smooth stone Classical cornice surmounted with a parapet. Nine shapely balusters in smooth limestone accentuate the top of the tower.

École Provencher has remained without additions since 1924, making it one of the few Winnipeg schools to have survived nine decades in its original form. 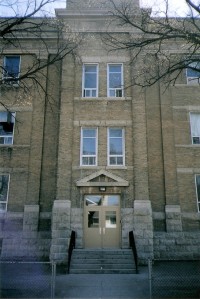 Notice the east and west entrances have different detailing. The pediment and the pavilion details on the end of the west wing are from the earlier school (left) while the east wing entrance (above) on the post-fire addition, is less elaborate.

École Provencher’s interior is among the most spacious in Winnipeg. The dimensions of the classrooms are 24′ by 32′, that’s 768 square feet! The hallways and most classrooms have 12-foot ceilings, which feel airy and open, accentuated in the classrooms with tall doorways and large plentiful windows. The hallways have a row of high horizontal rectangular windows into the classroom.

Most of the floors and stairs throughout the school are terrazzo: chipped stone and marble set in mortar then polished. It lasts forever. There is assorted frosted and mottled glass in various interior windows.

This is a very large school. At the height of its enrollment in fall 1954, fully occupied it taught 1,050 students. Part of the Louis Riel School Division, today École Provencher’s 23 staff provide French Immersion and English Language Arts to about 150 students from K to 6. 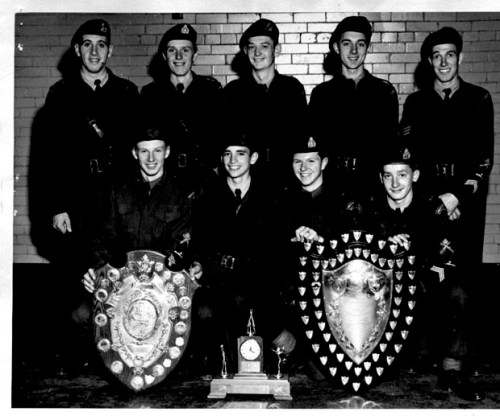 The Sacred Heart Cadets originated in 1911 and received their military affiliation the next year. When their uniforms and rifles arrived, the Provencher School #323 Cadet Corps became formal in March, 1912. The picture (above) shows Corps cadets from 1952.  The school basement doubled as a firing range. Some of the heating ducts still have dents from stray bullets. 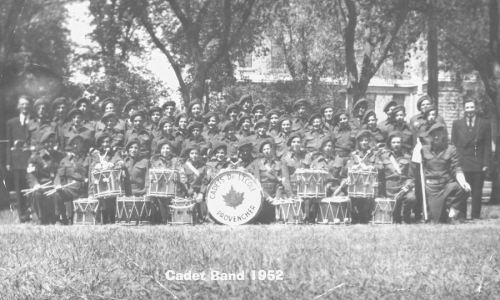 The cadet band (above) from 1952. The Corps’ old drum, along with the school’s trophies and memorabilia, are displayed proudly in a striking stairwell vitrine. The Corps was disbanded in November 1964. 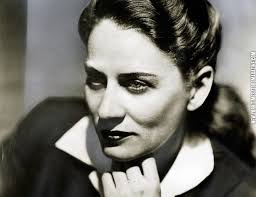 Among the illustrious alumni of École Provencher is a true Canadian celebrity, acclaimed author Gabrielle Roy (left). Not a student, Roy was a Grade 1 teacher at the school from 1930 to 1936. She wrote fondly about her days as a schoolteacher.

Artist and sculptor Tony Tascona (below right) remembers Roy as his first teacher. The class picture 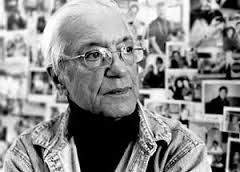 (below centre) was taken in 1932 and shows École Provencher Grade One class along with their teacher, Gabrielle Roy. He was born in 1926, so it’s likely one of the students is Tony Tascona.

Hockey was a prime physical activity at École Provencher. Once the skating rink at the rear of the school was flooded and hockey season started, the Provencher Paladins took to the ice, becoming senior champions in 1946. They used a room in the school basement with a separate entrance and low seating to put on their skates and equipment and exit directly to the rink.

During the 1950 Flood, l’Institut Collegial Provencher (the school’s name since 1929) accommodated 250 evacuees, becoming one of a dozen Winnipeg schools pressed into emergency flood service.

As a Collegiate, the school offered bilingual education. When St.

To honour Bishop Provencher, in June 1953 a bronze plaque of his face was placed on the large fieldstone in front of the 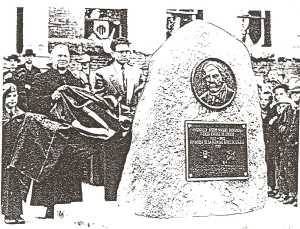 school. Unfortunately a thief made off with the plaque.

The first lay principal, Marcel Lancelot, took over in 1967. The large gymnasium on the third floor and a huge library in the basement were projects Lancelot accomplished in 1968.

Here is the school’s 2014 mission statement: As a French Immersion school, École Provencher strives to provide a safe and respectful learning environment which develops the acquisition of the French language, useful knowledge, skills and attitudes essential for responsible citizenship and lifelong learning.