Raised in rural Manitoba I developed an early appreciation of birds evidenced by the complete collection of Red Rose Tea Bird Cards on this page. My travels on the prairies including several unexpected birds. Find them all my Birdland page. 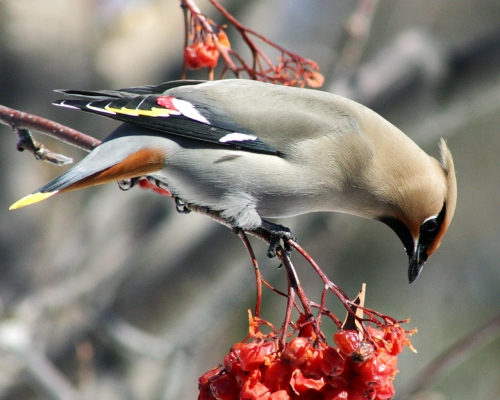 It was a strange April day in Manitoba: temperatures around 30 degrees C and clear blue skies all weekend long.  I was staying with my cousin, Duncan, in the east end of Brandon. On the day I arrived, Duncan pointed out an ornamental cherry tree in his neighbour’s backyard that was loaded with shriveled red cherries. Unfit for human consumption, the cherries are a delicacy of certain birds that, according to Duncan, each spring swarm the tree and feast on the cherries, now sweetened by winter’s freezing and thawing.

The next morning, as if induced by my cousin’s comment, the tree was alive with cedar waxwings. Famished from their long migration, the waxwings cover the tree and the ground below, ravenously eating the cherries. A flock of birds flies up from the ground into the branches and the ones from the tree swarm to the ground, excited birds, appetites whetted, blissful on a hot strange spring day.

The air was vibrating with the shrill keening of the waxwings. Several large still-bare nearby trees were decorated with more cedar waxwings waiting to feed, hundreds of birds in all. Flock after flock dined at the cherry tree.

Several curious species – robins, blue jays and starlings – arrived to see what all the commotion was about. These birds prefer feeders and worms to cherries but waxwing enthusiasm was contagious.  The feeding frenzy went on most of the morning then the flock was gone, the air still, quiet, hot.

In a few weeks, the cherry tree will be smothered in tiny white and pink blossoms that perfume the air with a sweet smell. By then subsequent flocks will have stripped all the cherries from the tree.

Cedar waxwings have the ability to digest a variety of berries, some of which are poisonous to humans. Gorging themselves for hours, waxwings have been known to get a little drunk if the berries have fermented.

A sleek, beautiful creature, cedar waxwings are strikingly identifiable: the brown topnotch crest and breast with grey wings and tail, the yellow wash over the belly, the dark eye mask and throat marking, the yellow tail tip and the distinctive waxy red drops on the wings which give the birds their name. The females are somewhat plainer. Cedar waxwings are one of the few birds whose numbers are increasing in North America.

Coniferous trees are favoured places to build their deep nests. Chicks are born late to ensure a supply of berries and bugs for their growth. I remember seeing waxwings as a kid in western Manitoba. Apparently they abound in Assiniboine Park in Winnipeg but I haven’t seen one in our neighbourhood for years. The last time I saw one was a few years ago at Last Mountain Lake in Saskatchewan. I was camping next to the bird sanctuary and saw a nesting pair.

What a hopeful sign it was to see a huge flock of excited birds so eager to fulfill their biological imperative. I had begun to wonder if there were large flocks of any birds remaining. It was good to see an old friend return with such vigor.