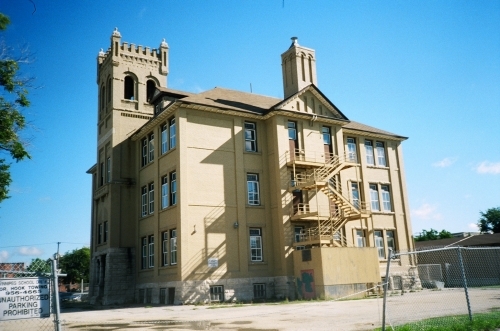 Sadly, Somerset School has become the latest school designed by Winnipeg’s first Architect and Commissioner of School Buildings J. B. Mitchell to succumb to the wrecking ball. In April 2005, at age 103, the school was demolished to make way for a drugstore. It earns Mitchell the dubious distinction of being among the “most demolished” architects in Winnipeg’s history.

The school was built in 1901 to serve the growing area population around Nena (now Sherbrook) Street, mainly of Icelandic and German origins. The west-end between Ellice and Logan had a very large Icelandic population. Early teachers used readers that were German-English, Ruthenian-English and Icelandic-English. Its first classes were held in February 1902.

Somerset School was an expensive building, its ten rooms and assembly hall cost $40,000 to build. The amount was deemed acceptable because of the school’s size and permanence. It boasted a drinking “fount” in every classroom and electric lights in place of oil lamps. The contractor was D. D. Wood.

J. B. Mitchell’s design was on the vertical plan – three storeys of buff, almost yellow, brick with an impressive entry tower and prominent matching side chimneys above large pediment gables. Set on a limestone foundation, the building had a five bay façade, its highlight the four-storey Gothic tower. Square with battlements and corner pinnacles, the tower had arched openings and high quality corbelling with dormers on either side as accents.

Somerset School was built on the “square plan” with a central hallway in each floor dividing the building in half with classrooms on either side. Large plentiful windows made for bright classrooms, each window had a stained glass transom.

Corner view of tower and chimney

The school was named for J. B. Somerset (1843-1901), the province’s Chief Superintendent of Education for Protestant schools from 1885 to 1887. The school’s first principal was Ralph R. J. Brown who believed, besides regular studies, art appreciation was important for the development of young minds.

Through fundraising by school concerts, he was able to adorn the walls of the school with reproductions of some of the best classical Roman and Greek art. Brown was an excellent singer and Somerset School was the first in Winnipeg to present Gilbert and Sullivan musicals. 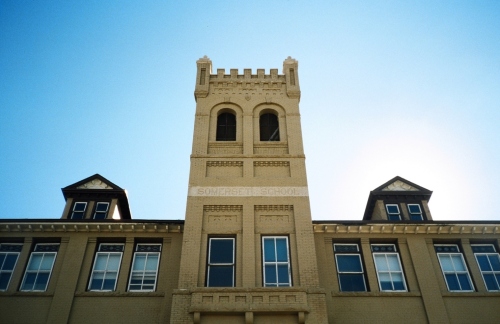 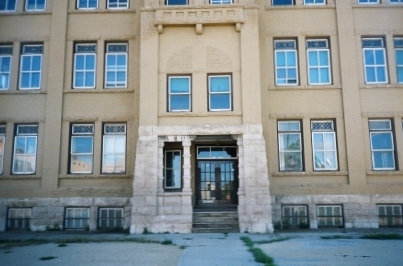 Ralph Brown enlisted when WWI broke out, fought in numerous European fronts and was killed in action in 1917. In his memory, Andrews School was renamed Ralph Brown School.

The 1948 Reavis Report condemned Somerset School as antiquated and unable to serve modern educational needs but the old school outlasted the onslaught of modernity for another 25 years and was “permanently” closed to students in 1972. Thereafter the City indicated it wanted to purchase the 1.7-acre lot for a housing development but the Board told them it was not for sale.

This proved a wise move since Sacre Coeur School, which opened one block away in 1973, immediately needed more classroom space. Somerset then became Sacre Coeur School #2 until the mid 1980s. It would be the final educational use for the wonderful old place.

Somerset School sat empty for two decades, protected by its inclusion on a government conservation list. There was an attempt by the West Central Women’s Resource Centre to turn it into a women’s housing co-op and transition centre but this was not to be. Despite the urgings of city councilor Jenny Gerbasi, the head of the city’s historical buildings committee, to save this “important neighbourhood landmark,” it was removed from the list and demolition followed.

Today, facing Sherbrook Street, you will find a ghostly reminder of once-elegant Somerset School: the limestone block from the original tower with the school name deeply carved into it is displayed at street level between the sidewalk and the parking lot of the huge drugstore that now occupies Somerset’s old home.

Named for King Edward VII’s consort, Alexandra School was built in 1902-03 at Edmonton Street & St. Mary Avenue where the Winnipeg Convention Centre now stands. Considered a true showplace of the time, it was from a design by Commissioner of School Buildings J.B. Mitchell. He would use Alexandra School as a template from which sprang designs for many of his best schools.

The original building was just two storeys with the third added a few years later. A rusticated limestone foundation supported a plain brick four up four down structure with a tall tower above the front doorway. The tower was built higher when the third floor was added. The first tower ended with the row of three arches across the front and two on the side. The next tower level had large round openings topped with a battlement complete with crenelation and corner pinnacles, very similar to the tower on Somerset School. There was a tall chimney with extraordinarily ornate brickwork and the roof edge was trimmed with an elegant iron cresting.

The cornerstone laying on October 13, 1902 attracted a glittering array of dignitaries including the Governor General of Canada, the Earl of Minto, Manitoba Lieutenant Governor Sir Daniel Hunter McMillan (1846-1933) and Winnipeg’s Mayor, John Arbuthnot.

The contract was awarded to the notorious Kelly Brothers & Co., the builders who would later work on the Manitoba Legislature. Alexandra School’s ten rooms and gymnasium cost almost $40,000 to build.

Winnipeg’s population growth was booming and a few years later a third-storey or “flat” was added to Alexandra School. To relieve the overcrowding occurring at Winnipeg Collegiate Institute in 1908 several high school classes moved into Alexandra School. They stayed until 1929.

Foundation repairs required the school to close for a period but it reopened in 1940. Its heating and plumbing were modernized in 1950. It served the downtown area until deterioration of both the building and enrollments resulted in its demolition in August and September of 1969.

There were prolonged discussions between the City of Winnipeg and the School Board over the land where Alexandra School had sat for 66 years. Finally, the City paid $500,000 for it and the Winnipeg Convention Centre was built on the site a few years later.

Find more demolished Winnipeg schools and other Manitoba schools on my Schools page.