Watch hummingbirds, bees, butterflies and bats “at work” in this beautiful creation by Louie Schwartzberg. Click any picture to start.

About 300 yards from the north boundary of Riding Mountain National Park, in a long-abandoned farm yard next to some tumbledown buildings, stands this beautiful old barn, striking a dominant pose against the backdrop of yellowed birch. Still retaining some of its red colouration – the traditional recipe for barn paint was cow’s blood, rust, lime, milk and linseed oil – and withstanding the northwesterlies with the help of a tall thick windbreak, the old place demonstrates classic massing and materials. The tiny and sparse windows meant a rather dark barn but they helped retain heat in winter. The barn tilts to the rear a little, the first sign of a future tumbledown.

The Manitoba Historical Society keeps a log of people who make significant contributions to the province and its people called Memorable Manitobans. Recently Linda was added to the list. You can see her page here http://www.mhs.mb.ca/docs/people/tooley_l.shtml

I am very touched by this. Thank you to Gordon Goldsborough and the MHS for honouring Linda with this recognition. It is well-deserved. I keep encountering people who tell me beautiful stories about Linda and how she made a difference in their lives. Her gifts live on. Reid

Beauty and The Bridge

“For Beauty is nothing but the beginning of terror we’re still just able to bear.” – Rainer Maria Rilke

“The bridge gathers the earth as landscape around the stream. It does not just connect banks that are already there. The banks emerge as banks only as the bridge crosses the stream.” – Martin Heidegger

Linda and I have pointed the rental car west on the thin ribbon of possibility called the Trans-Canada Highway. It is a clear spring morning, the sky an exhilarated blue. East of Portage la Prairie, suddenly arising into the pristine day, we see a curling twist of black smoke, ominous but beautiful. It rises quickly into the air a few miles ahead of us. We watch it thicken and grow, wondering what its source could be.

Two bridges span the Assiniboine River here, one for each traffic direction, separated by several hundred feet. On the eastbound bridge is the source of the dark plume. As we arrive we see a semi trailer truck, just the cab, ablaze on the bridge.

Flaming fuel drips off the bridge sending small barges of fire floating downstream on the surface of the river. Some of the liquid fire falls onto the riverbank, setting the grass to smoldering. The truck cab is completely engulfed in flame by the time we pull over and park. It seems to be the only vehicle involved in the fire.

Several other vehicles have stopped on the westbound bridge. We all get out of our cars to stand in helpless awe and watch the fire. Though there is no sign of the driver, we all know there is a human being inside the flames. A walk through hell in a gasoline suit! Someone calls 911 on their cellphone.

Tires explode sending flames shooting out over the surface of the river like unwholesome fireworks. The flames die in the water, leaving greasy slicks. More cars pull over to join our grim witnessing. The black smoke is so thick it casts a shadow over us. The air grows rancid with the smell of burning fuel, rubber and metal.

A loud crack comes from inside the column of orange and red flames tinged with petrol blue. In the air is the hiss of fire greeting water and the chatter of fire in dry grass. Someone begins to sob quietly.

Strangers standing together on a bridge, we will take with us this disturbing vision, the smoky remembrance and the emotional baggage of our chance encounter with the fiery fate of another stranger.

A few helpless minutes later, we are on the road again. Ambulances, fire trucks and police cars from Portage head past us to the accident scene. The following day we check the newspapers to see what happened on that two-lane concrete span over a prairie river.

The driver of the truck cab, having left his haul at its destination, was heading home to his young wife for the weekend. As he pulled over to pass a slower moving hough at the entry to the bridge, one of his low side fuel tanks caught the hough and sent the truck spinning around, bursting into flames when it hit the sturdy cement railing along the bridge. The truck driver had no chance of escape and died in the inferno. The driver of the hough, due to his placement on the bridge, was obliged to drive through the wall of flames, escaping shaken but uninjured.

The black smoke churning into the blue dome, fire falling from the concrete bridge flaring red in green grass, desperate flames spinning in the eddyfied murk of the Assiniboine, the sound of robins and blackbirds from the bushes in the ditch – it is only because we are so close to Grace that this Beauty is bearable.

Over our first fall and winter living together, Linda and I sat in on an experimental film course being taught at the University of Manitoba by Mario Falsetto. The course traced 20th century development of experimental films and included classics of the genre, films we’d read about but never seen.

One of the films that influenced me was by an American filmmaker named Maya Deren. Her Meshes of the Afternoon inspired me to create this dream starring Linda. In Passionate Leave, Linda dreams she has a dream, sees herself on TV, in TV and passes through the mirror while an eclipse of the sun occurs or does it? Shot on Super 8 at 729 Lorette Avenue late 1978, early 1979. Near the end of the film, there is actually a total eclipse of the sun, which occurred on February 26, 1979, a clear but bitterly cold day to be shooting film. 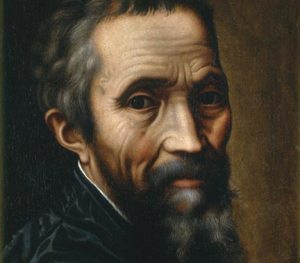 This portrait of Michelangelo di Lodovico Buonarroti Simoni was painted by Marcello Vanusti. Born today in 1475, Michelangel0’s sculptures and paintings survive as masterpieces of any age. Stepping into Michelangelo’s head for a minute, he said, “A man paints with his brains and not with his hands.” and “The promises of this world are, for the most part, vain phantoms; and to confide in one’s self, and become something of worth and value is the best and safest course.” and “I live in sin, to kill myself I live; no longer my life my own, but sin’s; my good is given to me by heaven, my evil by myself, by my free will, of which I am deprived.” Not Dead/Dead since February 18, 1564 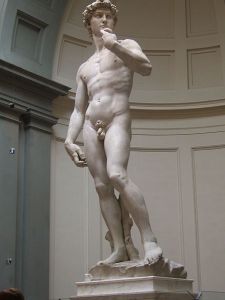 “What spirit is so empty and blind, that it cannot recognize the fact that the foot is more noble than the shoe, and skin more beautiful than the garment with which it is clothed?” – Michelangelo 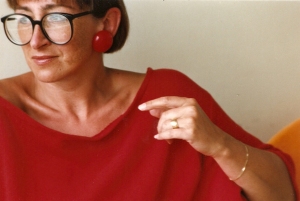 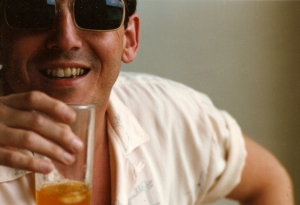 Beauty before me, with it I wander

Beauty behind me, with it I wander

Beauty below me, with it I wander

Beauty above me, with it I wander. 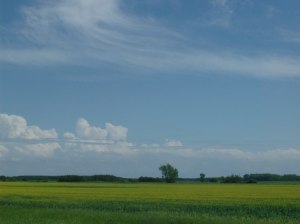 After several days alone and exploring the summer prairie, the hugeness of the sky, the openness of the space and the eternity it suggests conspire to affect me. The vast available quantity of the colour blue above me, around me, inside me has an influence on my body and thoughts. I watch for this. It is the subtlety of the Plains talking to me. I become still and experience its delightful eloquence.

Here’s a sample of the eloquence it inspired in Wallace Stegner from his classic, Wolf Willow: “There was never a country that in its good moments was more beautiful. Even in drought or dust storm or blizzard, it is the reverse of monotonous, once you have submitted to it with all the senses. You don’t get out of the wind, but learn to lean and squint against it. You don’t escape sky and sun but wear them in your eyeballs and on your back. You become acutely aware of yourself. The world is very large, the sky even larger, and you are very small. But also the world is flat, empty, nearly abstract, and in its flatness you are a challenging upright thing, as sudden as an exclamation mark, as enigmatic as a question mark.”

POPPIES is the result of a bit of footage I found that Linda took of poppies growing in our backyard. Linda was an accomplished gardener, loved being outdoors and digging in the ground. She nurtured these poppies year after year. The summer after Linda died, the poppies never even came out of the ground.  Come to our backyard. 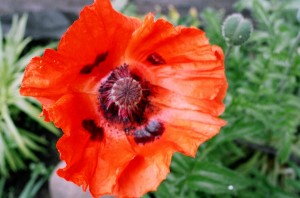 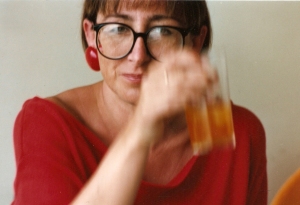 One of my favourite pictures