My Schools page has 29 posts about specific schools in Winnipeg and rural Manitoba, aspects of education development and information about teacher’s lives in the early 1900s including my mom’s 1930 Grade 11 exams.

Gladstone School in the early 1960s, not long before it was demolished. The fire escape slide (the white tube on the left side of the school) was accessible from the second and third floors. The school stood at Confusion Corner.

If you had the stomach for it, fire drills could be fun!

A major concern for school designers and builders is fire safety and evacuation in case of fire, especially for early three-storey schools. Fireproof materials, wide hallways and stairways were basic design features that helped ensure safety. Though Winnipeg had its share of school fires, most in early wood frame or log buildings, there were no major tragedies involving students. Nonetheless, new precautions were always a consideration.

One of the many innovations Daniel McIntyre, Superintendent of Schools, and J. B. Mitchell, Architect and Commissioner of School Buildings, brought to Winnipeg from their travels to other schools around North America was the spiral metal fire escape. The slides provided a quick and direct path from the upper floors to the ground in the event of a fire.

Spiral fire escapes were just what they sound like. Attached at the second and third floor landings, they were enclosed spiral slides of smooth metal – think water slides.  They looked like silos or huge preying insects. When the fire alarm sounded, second and third floor students evacuated one at a time down the slide. The chutes were narrow; the pitch was reasonably gentle but the descent itself was fast. Being more prone to adventure, it was usually the older grades that used the slides.

About 1907, Isbister School, now Winnipeg Adult Education Centre, was among the first to get a spiral fire escape. The structures were installed on the north and south sides of the school. Besides being a source of sudden fun for students, their greatest benefit was their ability to evacuate every student from the school in less than two minutes.  The slides proved so effective most three-storey schools eventually used the system.

The slides increased the excitement of fire drills with students “shooting the chute” and yelling at the top of their lungs. The first one through acted as a dust mop, sitting on a sack “cleaning” the way for fellow classmates.

The late comedian/singer Pat Riordan, who attended Isbister School in the late 1940s, remembers the slides as being quite scary for Grades 1 and 2 but, thereafter, fire drills became a much-anticipated thrill.

Though externally secured to some degree, the slides were an after-school fascination and offered endless hours of climbing and chuting pleasure.

Jeanette Dickie recalls the fire escape at John M. King School in the early 1950s. “I went there from Kindergarten to Grade 5. My friends and I would go there on Saturday and illicitly climb up inside the fire escape. We took off our shoes and socks to get a grip on the shiny metal surface then climbed in complete darkness to the second floor where the light slipped through the door that led to a little bridge to the school. We carried on to the third floor, sat on the little landing, put our socks back on to enhance our slide to the bottom where we shot out onto the ground. I am not sure which was more thrilling – the swirling ride down or doing something we knew we weren’t supposed to be doing!”

The slides began to disappear as older three-storey schools were demolished and replaced with one-storey buildings.  By the late 1960s, the slides were just a fond memory. 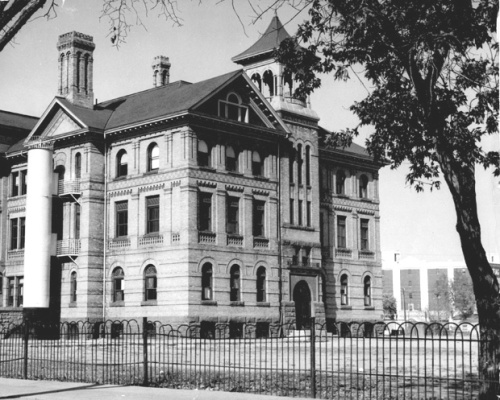 Known as both Mulvey School and Gordon Bell School, the building sported a metal fire escape until its demolition.

Find more stories about Manitoba schools on my Schools page.