Reid Dickie
More Water Sooner!
It’s the next crest of the Souris River that we are watching and preparing for now. Water volumes arriving from North Dakota are higher than expected making existing dikes inadequate to the coming water levels. The new crests could start arriving in Manitoba by the end of the week, sooner than anticipated. 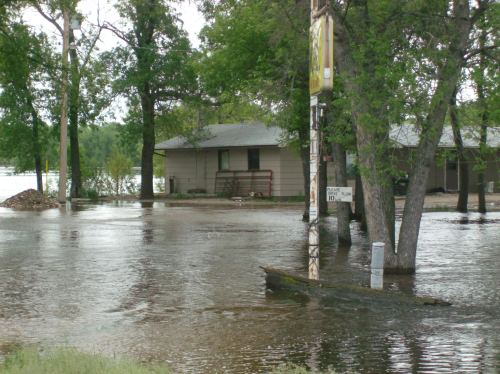 Melita, already virtually under siege by the Souris River, is calling for more volunteers to fill sandbags and do other duties and they are paying $15 an hour. If you can help out call the Melita town office at 522-3413. Mayor Bob Walker seems pretty confident the dike system will hold but he says two businesses near the dikes have been evacuated. So far no homes in Melita have been evacuated but that could change quickly. One section of the town is on alert.

A little further downstream Wawanesa begins to evacuate homes. Evacuation notices have been issued for 13 homes. Residents will have to be out by 6 pm Tuesday. Wawanesa mayor Bruce Gullet says it’s a precaution as is evacuating Wawanesa’s personal care home for the second time. He says the entire dike system is being rebuilt to make it stronger and higher. Volunteers are needed badly in Wawanesa as well.
The town of Souris has issued approximately 30 more mandatory evacuation notices for homes. Residents, mostly right along the Souris River and Plum Creek, must be out today. Sixty-four homes in Souris have already been evacuated. Famous for having the longest swinging bridge, which spans the Souris, crews have determined that saving the bridge is too risky. With the strong current, the landmark may be swept away. The town’s dike system is being raised and reinforced.  Souris emergency coordinator Sven Kreusch says they have requested military help but received no response.
If these small towns are having to pay for “volunteers” to help protect them, isn’t it a no-brainer to get the troops back to support these flood-weary people. Various protocols have to be satisfied for this to happen but, while the bureaucracy grinds slowly, the Souris River rises fast and travels furiously. While the province provides engineers to determine required dike work, they have few bodies to contribute to the actual building. I would hate to think Tsar Selinger is holding back on inviting the military to assist because they would steal his thunder, such as it is. Selinger is desperate. He needs to seem competent at something/anything but comes off looking cynical, manipulative and unkind again.
I don’t watch television but my friend Terry said the CBS Evening News translated the French word souris, meaning mouse, into English, changing the name of the river from Souris to the Mouse River. Pronouncing a word as complex as souris (sir’ iss) would be a major challenge for American talking heads and editors.
I took this picture of the Portage Diversion at Trans Canada Highway crossing yesterday. It’s still almost filled to the brim but with a little freeboard to accommodate the Souris now barreling toward it.

CKDM Radio in Dauphin is reporting extensive new flooding in many northern regions. It`s not just cottage country being inundated.

The RM of Ochre River has announced a Mandatory evacuation notice for residents of Beach Road and Crescent Cove. Residents of other areas in Ochre Beach affected by flooding will be allowed local access to secured areas. These additional areas are on stand-by for evacuation. The RM says if the high winds continue, additional evacuations will be announced later in the week. Over 50,000 sandbags are on route to the area from the Provincial Government. As well, a sandbagging machine and a team of flood specialists should be on the scene by Friday. No volunteers are being asked for at this time since strong waves are preventing the shoring up of dikes.

The Village of Winnipegosis is in full flood prevention mode as the town battles leftover flooding from Tuesday. Resident Melody Penner says there was lots of hard work happening yesterday. At last update the Village was experiencing breaches along sections of a dike which was completed north of Lily Street. The Village is asking people to please keep away from the beach area and trailer court as work continues, and they are warning that unauthorized vehicles and traffic may be charged. For more information, call the Winnipegosis information line at 656-4876.

All the heavy rain in the short period of time yesterday has prompted the Village of McCreary to go into a local state of emergency. However this does not mean people are being told to evacuate. The emergency has caused the

towns sewer system to overload and several basements have flooded due to the sewer backing up. The village is asking for volunteers to sandbag, if you can please go to the Village of McCreary shop at First and East behind the hospital. For further information call 204-835-2341.

The RM of Siglunes has extended the State of Emergency from June 2 to June 16th due to high lake levels, overland flooding and increased rainfall.Local emergency measures personnel are monitoring properties along Lake Manitoba and problem areas. Residents are encouraged to use caution when travelling on flooded roads. Flooded sections should be marked with stakes to identify at risk areas. Property owners are encouraged to check dikes and contact EMC personnel or the RM Office 768-2641 if they need further assistance or sandbags.

The media seems to be parked at Delta Beach. Meanwhile, most of St. Laurent and Oak Point were evacuated last night. The lake has moved inland almost a kilometer in some spots after last nights storm, with whitecaps rolling where fields and lawns once were. It is not just hurting cottage country anymore. These are people being displaced from their family homes, quite far from the waterfront.