I always shoot many more pictures than I can use in posts so I’ve assembled the extra church pics into short videos and uploaded them to my YouTube channel.

You get to see contextual views of how and where the building sits, shots of it from many different angles and some sound to accompany the vision. I have featured all three churches in blog posts. Click on the church name to read my blog post. Click picture to watch the video. 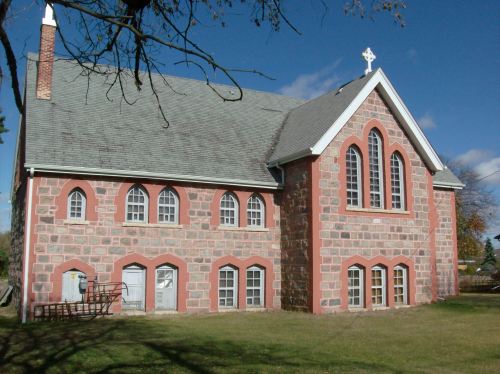 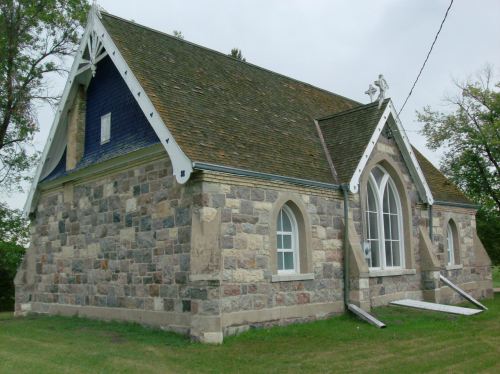 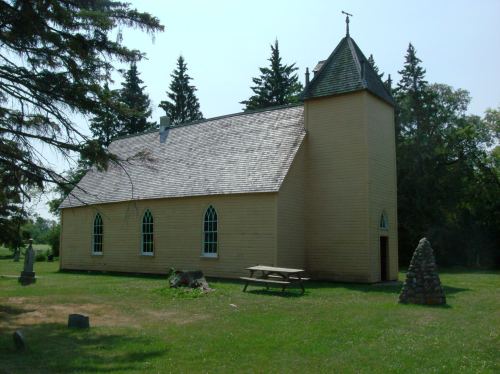 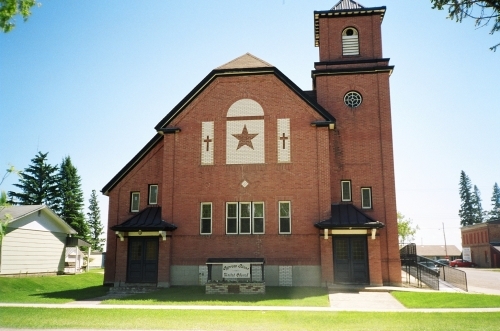 This massive red brick United Church stands impressively on a corner. Charles Bridgman of Winnipeg designed the place for a union of Presbyterians and Methodists in 1921. The three front windows have been bricked in with vivid crosses and a star below the arch. Ascension is accomplished here in novel ways using attenuated symmetry. The roofline of the entrances begins ascension. Small staggered rectangular windows prompt the upward motion. The roof angle over the left entrance and nave swoops upward, accentuated by the jerkinhead gable end and culminating in the fine tower. The tower feels like something’s been removed from it. 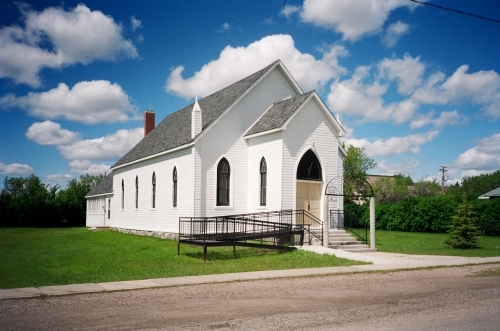 This modest and well-maintained wooden Gothic church was built in 1893 for a Methodist congregation. Sometime over its 118-year history, the church lost its belfry and steeple though the roof pitches and lancet windows still point heavenward. Notice the dainty corner pillars with plain pinnacles. The rear section was added on in 1957. 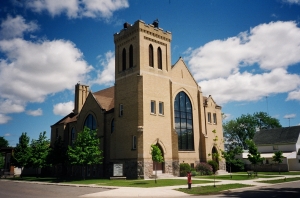 Built in 1907, this huge buff brick church stands regally at a street corner. The enormous tower with a castellated parapet, lively corbelling and tiered buttresses is well proportioned to the massive body of the place and contributes greatly to the vertical orientation of the structure. It rests on a fieldstone foundation that extends about five feet above ground. Two large parapet gables and several smaller ones adorn its roofline, a major chimney with Gothic details is a solid feature and the slightly pointed openings increase its Gothic persuasion. The front window is over two storeys high. 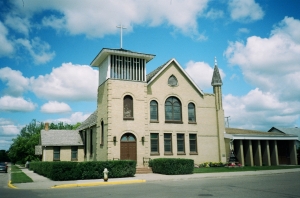 Built of buff brick in 1901 as a Methodist Church, the original steeple was replaced with a tower in 1962. There is a bit of a clash in styles with the tower addition but somehow it feels appropriate.

Look at the fenestration on the facade of this church. Beginning with the row of four heavily segmented rectangular windows with upper transom sections, move upward. On the second level they became three windows but still there are, subtly, four windows. The large window is composed of two small windows like the two that bracket it. The four fade into a three-sided trefoil, which rises further to become one. The sweetly pitched gable launches your attention toward heaven.

The thin turret on the corner with its steeply pitched roof and finial balances the handsome now-Italianate bell tower with its quoins, tall cross and low-pitched roof. The extended brick headers over the arches and flat windows that continue across the front as a stringcourse provide cohesion to the façade’s elements. 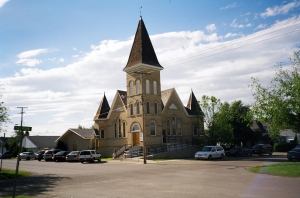 The same architect, James White, designed all the churches in Carberry including Carberry United Church. Built in 1903 for the Methodists, this church has a marvelously picturesque roofline. The lower twin spires on the octagonal corner towers conspire with the double steeply pitched gables to increase the elation of the tall spire with its metal finial.

All the Gothic roof points are softened by many Romanesque arches and labels formed by high relief brickwork. The windows are nearly all stained glass with a modest use of limestone sills. Carberry United rests handsomely on a stone foundation. 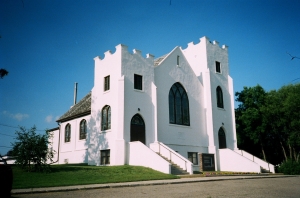 Built in 1914 and based on a design by architect Rev. Samuel East, this solid Gothic affair features two prominent uneven towers. Square and crenellated along the parapets, the towers are given more visual strength by the corner buttresses. The pitch of the gable between the towers is very appealing. Most openings have pointed arches. The windows are wide lancet divided with tracery and the stained glass is excellent overall.

The pair of stark front stairways makes the church’s imposing mass more inviting. Seen from the side the stairways suggest the paws of a sphinx with the nave, chancel and the front elevation representing the face and body of the symbol. Originally built by Methodists, it is now a United Church. A rear annex was added in 1968.