Tickets hadn’t sold very well until the day of the festival when it was announced that John Lennon would be appearing with a pick-up band. The stadium filled up quickly and updates came every half an hour about the plane carrying Lennon and band. Chicago and Alice Cooper were just starting their careers and all I remember about Alice was something to do with live chickens. I never cared much for Chicago’s music but the rest of the line-up brought musical depth to the day.  The four old boys – Gene, Jerry Lee, Little Richard and Chuck – were full-out rocking with Little Richard stripping down to a pair of wild shorts while assaulting the piano.

One whole section of the bleachers was reserved for bikers because they served an important duty that day. Both Lennon and his band and the Doors were formally escorted into downtown Toronto from the airport by a phalanx of bikers thus earning them their own section in the stands.

Lennon’s pick-up band for the gig was top-notch with Eric Clapton on guitar, Klaus Voorman (who designed the Revolver cover) on bass, Alan White (who’d sat in for ailing Ringo during the Beatles’ Australian tour) on drums with Lennon and Ono on vocals. The resulting set became the album Live Peace in Toronto 1969, not Lennon’s best music but certainly some of his rawest. 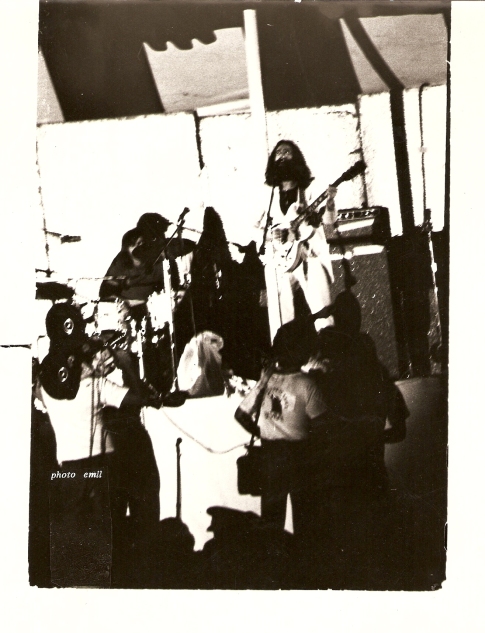 This picture by Emil was taken at the festival. The white thing on stage next to Lennon is idiot Ono screeching in a bag, making John look as ridiculous as possible, which was her task from the beginning. D. A. Pennebaker shot a film of the event called Sweet Toronto.

When I started at Ryerson I did concert reviews for the alternative weekly newspaper The Eyeopener. I was usually joined by Emil who was taking photography at Ryerson. Emil and I had never met anyone quite like each other before and we hit it off right away. We were opposites who attracted. He’d never met a hippie country boy with a rural prairie upbringing and I’d never met a sophisticated Greek photographer who came from an enormously wealthy family and always wore crisp white shirts, black slacks, smoked Gitanes and had a cowlick curl that fell over his forehead. Though not one of his best shots, Emil’s grainy picture of John Lennon matches the music of the day.

Lennon ended the set with Give Peace a Chance which the entire audience continued to sing for about 20 minutes after the band had left the stage. It was a beautiful eerie moment filled with possibility and promise. The Doors ended the day coming on stage about 2 a.m. and offered a violent and self-destructive show with Jim Morrison, then overweight with full beard, leaping into the air and coming down on his knees making great cracking sounds. This interview from around the time shows Morrison’s state and gives a bit of background on his interest in shamanism.

Fresh footage I shot of the preparations for the crest of Souris River in Souris, Manitoba over the weekend. More videos and the feature post to come shortly.

The Free Ranging Peacocks of Souris

The media come to Souris 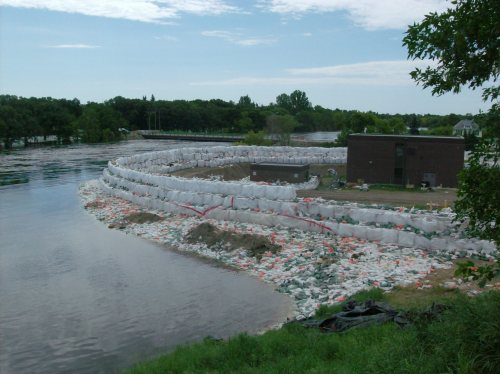 I first met Bruce Cockburn when he was an aspiring young folk singer who played The Onion, a subterranean folk club at Ryerson in Toronto in the late 1960s. This was before his first album was released. Bruce was a gentle soul who wrote delightful and intelligent songs and backed himself up as a virtuoso guitarist. Bruce was born today in 1945.  Here are a few gems from Bruce: “I wear my shadows where they’re harder to see, but they follow me everywhere. I guess that should tell me I’m travelling toward light”and “The second half of the ’60s really was a kind of learning period, in terms of writing, for me.” and “The trouble with normal is it always gets worse.” Bruce performs If I Had A Rocket Launcher.

“It’s never too early to start beefing up your obituary.” – The Most Interesting Man in the World

There is always an understory to an obituary. I have read and written enough obituaries, including my own, to know what’s being said between the lines. Alarmingly frequently people succumb to short or long battles with cancer or something equally thorough in heroic and/or valiant ways. If not fully stated in the story, the disease becomes explicit in the donations section. Not much mystery there.

Vivacious is a drunk as is his door was always open, so is a character. Fun-loving bachelor and he never married are usually gay; free spirit is unemployable, utterly carefree is utterly senile. Death has its own clichés: passed, passed on, passed away, passed over, passing, met his/her maker, crossed over, departed, lost, ad infinitum.

Finding the hidden meanings in obituary euphemisms can tell the story of an unclear death. Tragically usually denotes an accident. Suddenly indicates suicide more often than not. Unexpectedly cuts closer to suicide. I have even seen by his own hand followed by a short bitter obit. Taken by the Lord is wide open to interpretation as is Ascended.

Since Linda’s death, I have discovered several of life’s loose ends, including writing my own obituary. Very few people write their own obituaries, usually leaving the difficult  task to close family members under stress. I think it would be a loving gesture on anyone’s part at any time of life to write his or her own obituary. Think how much stress you’ll relieve when its time comes. You’ll be even more popular!

There are no children to write my obit, that’s why I did it myself. Plus I’m a writer. I enjoyed it. I recommend it as a thought-provoking exercise in self-awareness. I reflected on what was important to me in my life, what I wanted people to remember about me, my family and my accomplishments. I often tweak it. I chose the picture I want to accompany my obituary in the paper, where to run it, who to contact to get it in the right papers.

This isn’t the first time I’ve written my own obituary. In the late 1960s I attended Ryerson Polytechnical Institute (now University) in downtown Toronto to study radio announcing in a course called Radio & Televisions Arts. The curriculum included a writing class that I was keen to attend. The first day the writing instructor, whose name I have regrettably forgotten, walked in and told a room full of fresh faced kids, including this 19 year old from a little prairie town, that we were all going to die today and needed to write our own obituaries. He gave us very brief guidelines: write it all in past tense, say what you want people to remember about you, a short list of life data to include. We spent the rest of the sombre class quietly pondering our lives and scribbling out our death notices.

At 60 there’s plenty of source material to draw from but at 19, there isn’t a huge pool of fact to access. We were told not to embellish, be truthful. Many were flummoxed, a few, like myself, dived in trying not to flourish too much. One girl started to cry thinking about being dead. She got a pass on the obit. With his introductory bit of drama and flair, the instructor got my attention and I learned a great deal about the craft from him that year.

An obituary is a person’s final and personal contact with the world. This list offers suggestions on what to include, all are optional. The list is not exhaustive. I provide it as a public service.

Do you have a last will and testament? Check out my post.

Filed under Death and Dying, Life and Life Only, Public Service

This is the cover of a pamphlet published in 1892 to encourage Brits to move to Manitoba. Distributed by the Canadian Department of Agriculture and Immigration with offices in Liverpool, England, Toronto and Winnipeg. The cover was designed by Alexander and Cable of Toronto.