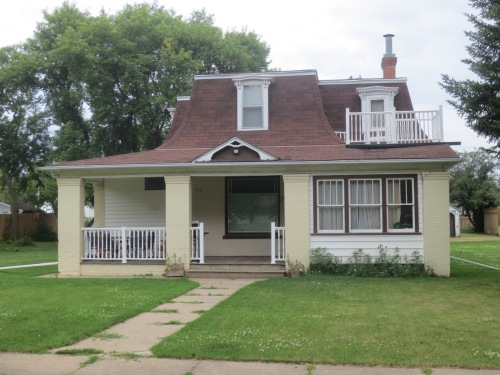 This sweet variation on Second Empire architecture was the home of W. J. Webb who ran the Carberry Meat Market. Built in 1895, the roofline is its most compelling element. A variation on a mansard roof is cut with tall ornate dormers and a small door opening onto a roof balcony enclosed by a scrolled balustrade. The roof spreads over the large porch and the front room and is supported by brick columns. The rich colours give the home a pleasant aura. I love the little white pediment above the porch entry.

The British Commonwealth Training Station No. 33 of the Royal Air Force was founded in 1940 to train military personnel for World War II. Its Service Flying Training School was located at Carberry. In five years 3,000 airmen were trained here with British wives and children accommodated in the town. The school’s motto was Unity is Strength. It published a regular newsletter entitled the RAF Rag and disbanded about 1945. Where the McCain Canada processing plant sits south of town was the site of the airport. 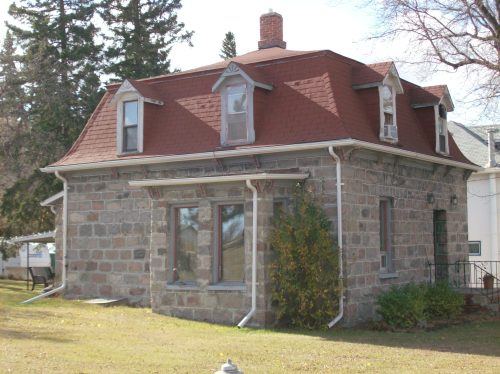 Among the collection of wonderful fieldstone buildings in Minnedosa stands this fine example of Second Empire architecture adapted to prairie needs. Commonly used for public buildings in Canada, especially those built by the Federal Department of Public 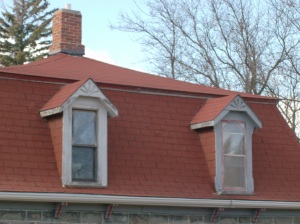 Works in the late 1800s and early 1900s, Second Empire architecture was adopted by the Roman Catholic church and used for its schools and convents well into the 20th century. Built about 1896 from local fieldstone and first owned by Charles Currie, the house sports many well-defined details of the style. The red mansard roof dominates the house with the chimney poking up out of the top and tall dormers on all four sides. The dormers have pediment roofs with delightful sunburst detailing. The little house has two full bay windows with the street side bay featuring tall windows on all three sides. 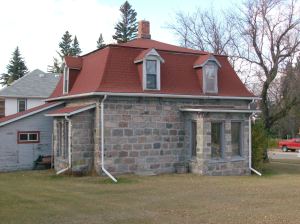 The scrolled brackets under the eaves are painted in  two colours, a characteristic which complements the mottled colours of the fieldstones. Situated on a corner, the house gives the impression of stability and conveys a sense of its own history.