Many pages on my blog relate in some fashion to Manitoba’s rich built and cultural heritage. The MB Heritage page features seventeen sites including this classic. Who can resist an old red barn?

About 300 yards from the north boundary of Riding Mountain National Park, in a long-abandoned farm yard next to some tumbledown buildings, stands this beautiful old barn, striking a dominant pose against the backdrop of yellowed birch. Still retaining some of its red colouration – the traditional recipe for barn paint was cow’s blood, rust, lime, milk and linseed oil – and withstanding the northwesterlies with the help of a tall thick windbreak, the old place demonstrates classic massing and materials. The tiny and sparse windows meant a rather dark barn but they helped retain heat in winter. The barn tilts to the rear a little, the first sign of a future tumbledown.

The Lonesomes #1 – Barn Where the Thing Happened 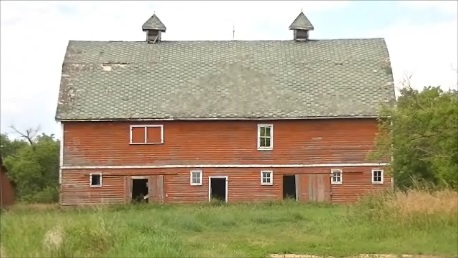 Barn Where the Thing Happened

An abandoned red barn is revealed as the scene of an old mystery.

Oh my! Oh my, yes. That’s the barn where the thing happened that nobody talked about.

DURING THE NEXT LINE, VOICE CHANGES TO THAT OF A 10-YEAR-OLD GIRL

I remember it like it was yesterday. It was a hot day in July. I was at the butter churn when Mama came rushing in looking as white as a funeral sheet, like she seen a ghost. She just stood still in the middle of the kitchen. Her hands had blood on ’em. There were little red rainbows of blood on her white apron. Mama looked at me and started to cry. Though I could tell she didn’t want to, she just stood there like a statue and cried. Then Papa came rushing in lookin’ real pale like he seen the same ghost as Mama. He looked at me, his face went angry and he took Mama onta the porch. I could hear ’em talkin’ but not their words. The way they stood made me scared. All I really heard was Papa say, “And we must never speak of this again.” (SENSE OF WONDER) And they never did. (PAUSE) Ever. (PAUSE) After that Uncle Wilber never came around the farm no more. (PAUSE) Nobody ever talked about that either.

DURING THE NEXT LINE REVERT BACK TO OLD WOMAN’S VOICE

Oh my, yes. That’s the barn where it happened. I remember it like it was yesterday. Oh my, yes.

The Lonesomes is divided into Farm Life and Town Life. The first nine are the Farm Life segments.

On the surface this appears to be a simple recounting of an event from a child’s life. However, it has a darker, more sinister backstory.

The event in the barn happened in 1928. Our story begins with an elderly woman identifying the barn that we are seeing, and will see for the duration of the vignette, as the one “where the thing happened that nobody talked about.” The old woman is startled by the image of the barn which carries so much weight for her. It’s almost like a ghost. “Oh my,” has startled surprise. With “Oh my yes” she’s resigned. Then she sounds like she is identifying the barn for someone in the next line.

During the second line, the voice does a startling thing – it changes from an old woman into a little girl about 10 years old. The image and the old woman’s memory has taken her back to the barn of her youth.

The little girl recalls the day with great clarity. The month, the weather, her job at the churn are all mentioned. However, she has much uncertainty as to what is going on. She knows for sure it isn’t normal, something happened. Her parents both appear and act in unusual ways after coming in from the barn. Both parents are “white as funeral sheets,” emotionally agitated and respond to her presence in different ways – Mama cries, Papa gets angry.

This piques the girl’s curiosity, especially when they whisper on the porch. She listens intently to their conversation. She “could hear them talkin’ but not their words.” She pauses then curiosity changes to fear when she recognizes her parent’s body language as they stand on the porch. Visualize the parents’ postures – so basic and evident that a child can see their meaning and react with fright to their strangeness, perhaps outright hostility.

The only thing the child clearly hears is the pact being made when Papa says, “And we must never speak of this again.” She is absolutely sure of this. “And they never did.” has a sense of wonder. She pauses again, more wonder and a touch of frustration, “Ever.” This establishes the dire nature of what happened but gives us little information on what it might have been.

There is a longer, thoughtful pause. She does an uncertain “…Ummm” before she speaks. The little girl connects what happened in the barn with Uncle Wilber who never came around the farm thereafter. In her mind the two are linked simply because, “Nobody ever talked about that, either.”  Several secrets were born in the barn that hot July day.

In the last two lines the opposite of the beginning occurs. The first “Oh my yes,” is in the little girl voice which becomes elderly over the course of the last two lines. In the final “Oh my yes,” we can still hear an echo of the child and her confusion, as if she still doesn’t know what happened that day. She is resigned to never knowing, or perhaps resigned to her denial.

The little girl is matter-of-fact about the event but confused by it all. She delivers the skeleton of the story, her parent’s actions hang clothes on it. Both her innocence and curiosity are shaken by the new secrets she must live with, even though she doesn’t know for certain what they are.

Clipped and colloquial, the bad English and sentence construction is reflective of the era. She isn’t very well educated but she does know what a statue is. She’s bright but speaks less from her schooling and more from her listening, like “funeral sheets” as a local expression.

What really happened in the barn: Papa killed his brother Wilber in the barn because he found out Wilber had sex with Mama and the girl telling the tale is Wilber’s offspring, not Papa’s. This explains the blood, the crying, the anger, the whispering, the pact they make on the porch and the subsequent years of silence on the event.

In her first of four appearances in The Lonesomes, Nora Nordin-Fredette did a wonderful job of transforming from an old woman into a child and back again keeping the mystery intact.

I had the germ of an idea about something bad that happened in a big old barn as remembered by an elderly lady who reverts back to childhood to tell her story.

There is no shortage of old barns in rural Manitoba. I shot several beauties, none of them red. Looking at my footage I realized the barn had to be red, not just for its classic representation but also to suggest the violence implicit in the story.

I happened upon this barn on the eastern end of the Brandon Hills when I was doing some heritage work. I shot it from several angles. Once I had the story I realized I could utilize more of the detail on the barn to accentuate parts of the yarn, notably the pointed lightning rod and the battered cupola. I went back and re-shot the barn on a brighter day, capturing the details. In post production we bumped up the redness of the place to better suit the story.