There are 51 day trips on my Day Tripper page, all in Manitoba, several that can be stretched to two or three days. Spruce Woods Provincial Park about 2 hours west of Winnipeg offers diverse experiences communing with nature in all seasons. More of a night trip my post called Gathering Moonlight at Spruce Woods Park reports on one of my many all-night hikes to Spirit Sands, this one on June 2012.

“The moon’s a harsh mistress, it’s hard to love her well,

The moon’s a harsh mistress, the sky is made of stone,

The moon’s a harsh mistress, she’s hard to call your own.”

These are the buttery days of a new ancient summer. In their fluttering perfection, butterflies dot the world. Their true colours range from solid black through red, orange, yellow to iridescent blues, always stoned on some intoxicating nectar or other. Dragonflies have started to appear; mosquitoes aren’t far behind. Such was the world I entered Monday when I checked into Yurt #4 at Spruce Woods Provincial Park for a two-day stay.

Ensconced on my deck facing WNW, the temperature around 28 degree C, I have found a little Eden. The late afternoon breeze plucks music from the oaks and cottonwoods along the Assiniboine River, which I can see shining below. A dozen kinds of birds twitter in the trees, their songs striving to capture the counterpoint of the afternoon. They are successful every moment.

A huge yellow butterfly with blue trimmed wings dances above my glass of wine. Unable to resist, it lands on the rim, sips delicately and does a backward somersault off the glass into its fluttery world. My plan is to await dusk then hike out on Spirit Sands to watch the full moon rise over the dunes. 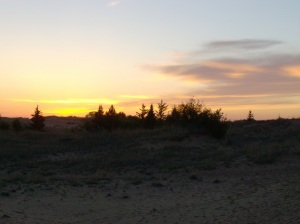 The day is cooling perfectly as I head out to Spirit Sands about 9:30. The golden sky deepens to red then crimson then purple and darker as I surmount the log ladder up the dune face. Arriving at the place on the dunes Linda and I always visited, I hear voices among the trees below. The last of the humans are clearing off the trails. I am alone.

As I await moonrise, coyotes howl in the west and are answered by others in the east. The flies and mosquitoes find me extra attractive with my coating of sweat from the hike. As a slight evening breeze cools my skin, a pale glow on the northeastern horizon heralds the full moon. It swells into

view bulbous and red, and I am filled with bliss and gratitude for this witnessing.

I spend an hour watching the night deepen and the moon whiten. Hiking back during the very last moments of twilight, the shadows are flecked with occasional fireflies. After decades of gathering moonlight, the long-fallen bodies of blown-down trees shine like silver. Standing armies of wolf willow glow eerily in the moonlight.

Back at my yurt I light a fire and watch the stars come out. Hundreds of fireflies flicker on and off in the trees around my yurtyard. Fireflies are a positive sign of a healthy habitat. Crickets and choruses of frogs, the small cries of night birds, crackle of the fire and rustle of the constellations harmonize around me.

After a long sound sleep I awoke Tuesday to another perfect day! I took a drive to the nearby Criddle/Vane homestead (blog post to follow), toured the area a bit, lunched at the Robin’s Nest in Carberry where I see the temperature to be even hotter tomorrow. The Robin’s Nest is a quaint little restaurant and motel along the TCH. I recommend it for its good country food, friendly staff and it’s now licensed.

Back at Yurt #4, the drone of a bumblebee intoxicates me in the heat. A red-headed woodpecker taps out a secret message on the trunk of a gnarly old oak. The park is still and quiet today with just the warbles and sighs of the denizens. The day wears away and night captures the land. Like stars, the fireflies are continuous tonight. Everywhere I look I see them, flitting through the treetops or winking shyly from the pitch-black understory.  As I stand, a firefly zips by my face exploding like a tiny flashbulb.

Crickets and frogs keep time with the pulse of the night and, later, dozens of coyotes in all directions create an exhilarating aural experience making it sound like the whole world is composed of nothing but coyotes and their haunting theories. Another thoroughly restful sleep ensues.

Crews continue working to bring Spruce Woods Park up to its standard before last summer’s flood. Today as I was pulling out I noticed the road to Spirit Sands was cut and a large culvert was being inserted under the road. The ditch along the highway is being worked to remove some of the flood cake that still coats parts of the park. Daily horse-drawn covered wagon rides to the dunes and punch bowl begin in July and summer nature programs are scheduled. So whether you are gathering sunlight or moonlight, the park’s numerous trails await your hiking boots and your curiosity. (Take water. Do a tick check.)

Two other things to mention about Spruce Woods: