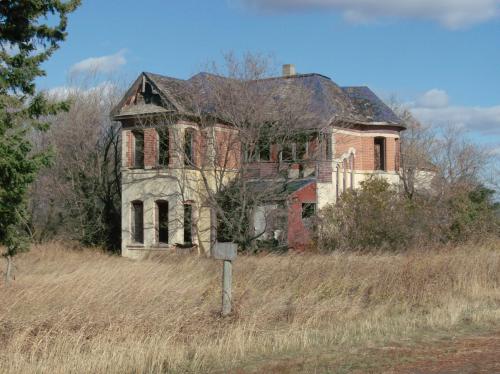 Robert Fern Lyons was an early settler in the Carberry area who owned 2700 acres of land and raised crops and livestock. A Conservative, Lyons was elected to the Manitoba Legislature five times between 1892 and 1914. Lyons built his mansion just outside of the town. Though long abandoned and disintegrating quickly, the crumbling mansion retains enough of the detail to suggest its original magnificence. Built around 1895, the red and buff brick two-storey house combines elements of Italianate and Queen Anne architectural styles into a striking and luxurious pile. The first floor features buff brick, the second floor red brick, both laid in standard running bond. The commingling of both coloured bricks on the second floor is fluid and dynamic. The asymmetrical massing of the house, round segmental arches over the windows and the accent quoins are all Italianate elements that give the house a villa feel. Queen Anne style is represented in the two-storey rounded rooms, the bargeboard and fish scale shingles on the gable ends, the ornate three arched windows, which open into the stairway, and picturesque roofline. I suspect this place will be torn down soon. Watch my 3 minute video tour of the shambles inside the old mansion.

Carberry and North Cypress Rural Municipality are Spud Country. Every year local farmers plant and harvest about 20,000 acres of potatoes, much of it processed at the nearby McCain Canada plant.