Towering above all else, including the cottonwood trees in the little French community of La Salle, MB, south of Winnipeg, stands St.

Hyacinthe Catholic Parish Church. Representing the strong faith of the local population for over 100 years, this masterfully achieved edifice of buff brick possesses an inspiring plethora of design details on every facade. 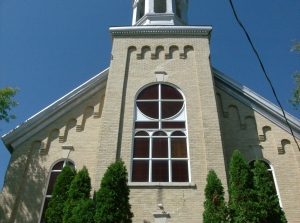 elaborate front facade that evokes order and ascension climbing to a slim bell tower surmounted by a shimmery steeple.

Let’s take a close look at the front facade. The most striking feature is its comfortable symmetry, not a line out of place, not a wasted brick, just upward sweeping motion.

The brickwork is marvellous. There are three arcades (rows of arches), each with five arches, formed by the brick design, two are sloping downward under the roof eaves and the centre spans the front of the entrance pavilion just below its cornice. The smooth corbelling (layering of bricks) that forms the arcades is superb, creating interesting shadow and light combinations.

As with the arcades, all openings in the building are arched. The front entry, the window above with its trio of slender windows under a circular focus and the openings in the bell tower are all arched. All openings have a limestone keystone at the apex. The keystones on the front have small tablatures. 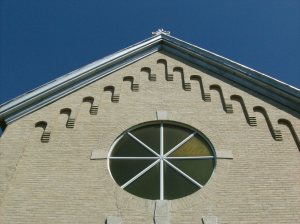 On the ends of the transepts there is another series of corbelled arcades, thirteen arches under the eaves and above large round windows with spoke tracery. All around the place under the eaves is a sweet bit of corbelling that adds to the ornate sensibility of the church.

In true heritage geek parlance, the bell tower/steeple is a honey! Eight arched openings, each keystoned with a scroll and separated by square columns and capitals, create the still-inhabited bell tower. Above the bell tower a short eight-sided dome supports the steeply pitched octagonal steeple that ends with a round pinnacle and a metal cross spire.

Baldur is a little community on Hwy #23 in southern Manitoba named after the son of Odin, a major deity in Scandinavian mythology. Baldur personified the nobler qualities of human nature. Known for his beauty, Baldur was also the god of innocence and the summer sun. A few years ago I took some pictures of two fine examples of early prairie commercial buildings that still stand on Baldur’s main drag. The above picture shows the contextual view of the two tan brick buildings.

Now Kay’s Place, the smaller, more modest brick building was built in 1910 and sports fine brick detailing on the second floor. The corbelling under the cornice and the broad fanned arch with datestone highlight the roofline. The three bay façade has inset windows with rough limestone sills and regular pilasters to offer movement. It is a shame the ground floor façade is such a mess. What wonders once lurked, perhaps still do, beneath the poor cladding? In this case, half a building is better than none.

The Fowler Block, the larger commercial building, was built in 1899 by Alex Fowler from a design by Brandon architect W. H. Shillinglaw. Fowler arrived in Baldur in 1891 to operate the new facility for the Manitoba Elevator Company of which his father was president. Fowler purchased the local saddlery business of C.W. 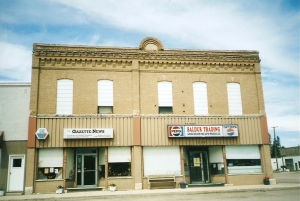 Watson in 1895 and by 1899 had commenced construction of this building. The saddlery business occupied the smaller of the two retail spaces on the main floor with various merchants renting the other space. In 1904 Alex became Baldur’s postmaster and for the next 31 years the town post office was located in the Fowler Block. The structure remained in the Fowler family until 1978.

The Fowler Block is an excellent example of the type of commercial block commonly constructed in southern Manitoba between 1890 and 1920. The design is 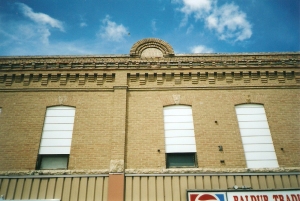 straightforward and attractive with vertical brick pilasters separating the stores.  The second storey windows feature segmental arches with rough limestone keystones and a limestone belt course running below. The most eye-catching features are the rich double rows of corbelling along the cornice and the fanned brick arch with the datestone, similar to the other commercial building. A rather amazing feature of the Fowler Block is the integrity of the original façade, which hasn’t been trashed with inappropriate signage or colour, other than the vertical cladding above the windows. The brickwork on both buildings is standard running bond.

The exterior ground floor is original, attractive and well maintained, featuring indented entrances with opposing sidelights and carved entry surrounds. Existing signage is appropriate in size and content and does not detract from the overall beauty of the building to any large degree. Fortunately, the interior retains many original features including decorative pressed-tin ceiling panels. The overall condition is excellent which bespeaks the fine originality of the design and the presence it has in this small town.