A Vickers Viscount in Garland?

Garland, Manitoba is a tiny place settling into the bush near The Ducks, as locals call the Duck Mountains. Garland consists of a store, post office, hall, some churches, a few nicely tended yards around little cottages, the sweet smell of prairie air and a Vickers Viscount airplane parked in the middle of it all, looking more than a little like it just landed. This is the kind of anomaly that sparks my curiosity so I went off in search of the story.

I didn’t have to go far. Don Fyk lives two miles from Garland on the family farm. Don’s family homesteaded in the area; several of his relatives are buried in the little cemetery on the highway at his 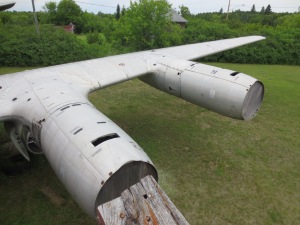 turnoff. Don, a pilot and airplane buff, farms, does repairs, heavy construction, crop dusting and grows a variety of buckwheat much sought after in Japan, his biggest market. He’s an amiable fellow, hard-working, successful with a fine sense of humour. We sat and had coffee in his office one afternoon in the summer of 2013 and he told me the story of the Garland airplane. That’s him and his aircraft in the picture above.

Back in 1982 Don’s brother-in-law was looking to build a new cabin,

something different. He considered a log cabin but went after the idea of an airplane fuselage as the living space. After searching around, they found two Vickers Viscount airplanes at Teulon in Manitoba’s Interlake; both had been cannibalized, neither were in good condition. However, they managed to combine parts from both and come up with a whole aircraft. He bought the airplane for $700 then faced the mammoth task of transporting it from Teulon to Garland, a distance of 380 kms.

Don, his brother-in-law and other family members, with the help of a consultant, dismantled the 8 tonne airplane, took off the wings and tail feather, building special dollies to load the pieces on several trucks. In early May, 1982, the five-truck convoy received a special permit to transport the load down major highways, passing through

The Narrows then heading north of Dauphin. Don was surprised that people turned out at every little town to watch them go by. Even the Winnipeg Free Press covered the trek which wound up taking 12 hours.

For the two weeks needed to disassemble the airplane, it took about 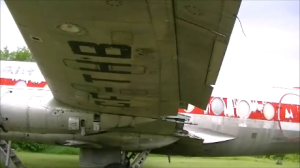 as long to reassemble it on the large lot in Garland where it sits today, chained and anchored down against strong winds. Interior renovation began. They gutted the aircraft, laid carpet, connected it to hydro for lights and electric heat, added a stereo system, air conditioning, all the amenities except running water. The front area accommodated a living room, behind that a galley kitchen and at the

In recent times, Don’s Viscount hasn’t been used much. A couple of years back the plane was vandalized on the interior but Don plans to restore it when he has the time. He pays about $300 a year in taxes for the lot and aircraft. Don has had offers from people who want to turn it into a bed and breakfast but he feels very attached to the plane. The novelty of the aircraft and its incongruent location will continue to draw the curious, like myself, to little Garland. For now, it will stay as it is – a startling surprise in a prairie village.  Good!

Trans-Canada Airlines (TCA) was the first North American company to fly Vickers Viscounts starting April 1, 1955 on its Montreal to Winnipeg route. By November of the same year TCA Viscounts were serving fourteen North American cities. The aircraft flew North American routes for TCA until 1974. Don Fyk’s aircraft belonged to the TCA then Air Canada fleet. Both the logos were painted over when Don bought the plane but the paint has since peeled away revealing both names. 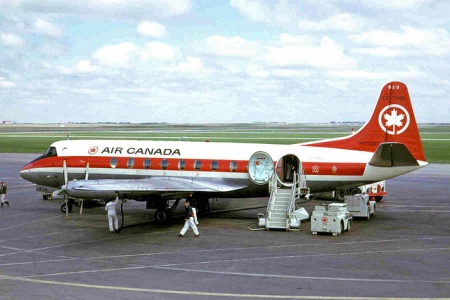 This is a picture of Don Fyk’s plane, identification number CF-THB, when it was still part of Air Canada’s fleet taken July, 1967. My thanks to Ken Fielding for the pic.

What was the original appeal of the aircraft?

It was a game changer! 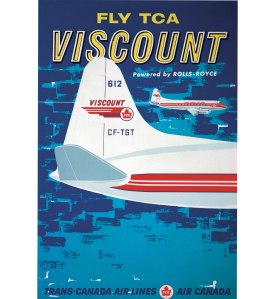 The Vickers Viscount revolutionized passenger air travel when British engineering conglomerate Vickers-Armstrongs introduced it in 1948. Instead of a piston engine, the Vickers Viscount used a Rolls Royce Dart 510 turboprop engine, a new form of propulsion.

Piston engines were noisy, smelly and couldn’t provide a smooth ride. The Viscount changed all that with its turboprop system. It was much quieter with fewer vibrations, the cabin was pressurized for comfort, the ride was smoother and oval panoramic windows offered a view from your plush and adjustable seat. Flying had become comfortable, even glamorous. The plane was designed for medium-range flights with 24 to 48 passengers.

The Viscount became one of the most profitable post-war transport aircraft. Four hundred forty-four of the luxury liners were built, six were prototypes and the rest went into service worldwide. 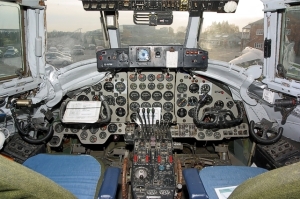 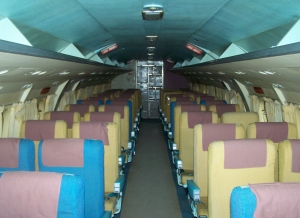 This picture shows what the original Viscount cockpit looked like with its wide front and side views, instrument panel and seating.

This is the interior of the Viscount cabin in 1950s-modern primary colours. Comfort was built into every aircraft. This is what Don’s plane would have looked like when it was still in service.

According to vickersviscountnetwork.net there are 47 Viscount airframes left in the world, fifteen in museums. Along with his, Don thinks there are three other Viscounts in Canada: Western Canada Aviation Museum in Winnipeg has one, one in British Columbia Aviation Museum in Sidney and one in the Canadian Aviation and Space Museum in Ottawa . 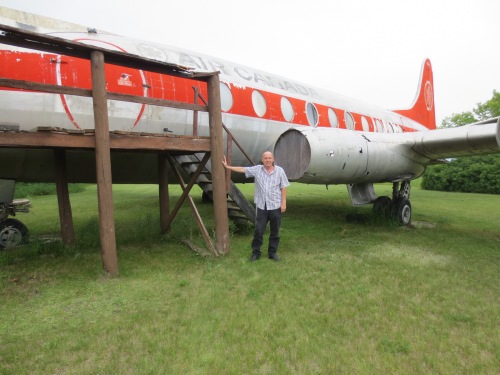 I took my video camera to Garland and shot a short four-minute tour that includes a walk around the outside of the airplane with close-up views. Click on the picture of VV and me above to watch.

A few other videos of Viscounts. The first one shows the aircraft loading passengers then starting its engine. The second video shows a Rolls Royce Dart 510 turboprop engine that’s been removed from a plane being started. The last video shows a vintage Viscount making its final flight and landing in 1996.

I am grateful to Don Fyk for sharing his story and part of his busy day with me. To end off, a direct quote from Don about flying, “I have my faith in my airplane like I have my faith in God. You cannot doubt it for a second or the what if will kill you.”