Brandon mayor Shari Decter Hirst emphasized at the morning media briefing that Brandon is in for the long haul now. “This is our new normal for the next little while,” she said. “We have to live with this.” 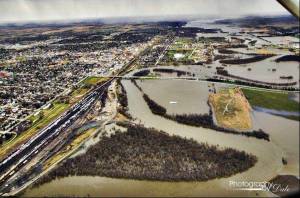 The Assiniboine hasn’t crested yet. Brandon is in for weeks of high water levels requiring patience and forbearance. This morning new precautionary measures were announced. The Corral Centre and adjacent Paddock shopping centres are now under mandatory evacuation. The few stores still open are closing today. Traffic and speed limits on 18th Street are being restricted due to concerns about vehicles crashing into dikes.

Fifty thousand more sandbags have arrived in Brandon to increase the 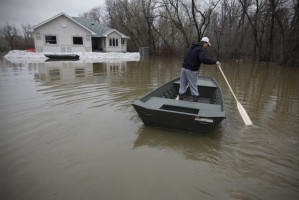 dikes by another 30 cms to accommodate new higher water levels announced by the province today. The crest of the Assiniboine is still a few days away according to Manitoba Water Stewardship. When it arrives it will be a prolonged crest, at least three days. No new residential evacuations are planned. Over 1300 people have been forced out of their homes so far. The few stragglers left in the flood risk zone have indicated they will leave today.

The Trans Canada Highway remains open despite rising water levels in Grand Valley. There is no water on the road.

The province’s decision to let river water intentionally flood an area southeast of Portage la Prairie has been put on hold for now. The flooding was supposed to occur at 8 a.m. this morning but now an announcement will be made this afternoon at two. Many of the residents in the “controlled” flood area had some loud and nasty things to say to the media yesterday and this morning. The premier is considering his future here and one can only hope this move was vetted by multiple engineers with credentials and experience but no political motives rather than the egocentric dreams of a single-minded politician looking to “save Manitoba.” The Manitoba website promised a map of the whole area to be intentionally flooded but none appeared and is still not available today. This is not a good time to keep people in the dark! Below is a diagram of the proposed site at Hoop and Holler Bend where the intentional flooding begins. 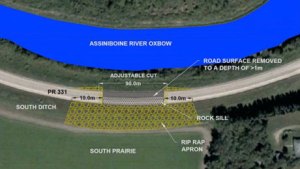 Although not as transparent as it should be, provincial government flood information is here. My next report will be this evening after the 4 p.m. Brandon briefing and provincial decision on intentional flooding. Thanks for checking out my blog. Reid