Amy Winehouse was the last singer that struck a chord with Linda. She reacted the same way to Amy as she did to Bruce Springsteen – love at first sight! She adored Amy, knew all her lyrics and sang along with enthusiasm. I am certain that Linda and Amy have spent some of eternity harmonizing on those great old Shirelles songs since Amy passed through. Linda loved Amy’s cover of the Zuton’s tune, Valerie, certainly one of great pop songs of the century. Two versions here: the first Amy and solo guitar which shows off her wonderful singing talent; the second with her full band on BBC. Both are enchanting in their own way. What a band!! I love Amy, as well, and feel privileged to have shared a few minutes of eternity with her here on earth. Do you think with a name like Winehouse that succumbing to alcohol poisoning reaction, or whatever it really was, had some pre-destiny to it in Amy’s case?

Reid’s Pop Song of the Month and Why

Quick definition of pop song: any popular song from any era regardless of musical genre.

This month we need to use the Wayback Machine to reach the Pop Song of Month. It’s Roger Miller’s biggest hit, King of the Road, which reached #4 on Billboard in early 1965. Watch how Roger swings it.

Notions about bums and hoboes usually had a highly romantic aura to them in the first half of the 20th century, getting their first mass airing in 1929 with Harry McClintock’s tune, Hallelujah I’m a Bum. During the 1930s Depression, riding the rails was no longer just the purview of bums, becoming a relatively common experience, yet retaining a cultural mystique that fascinated people. One of comedian Red Skelton’s best known characters was Freddie the Freeloader, a loveable bum.

The King of the Road is a loveable bum – friendly, wise, lazy, a little larcenous, knows the ropes and the rails, has tasted the wine and reads the symbols. He always carries a piece of chalk to leave behind appropriate symbols for subsequent hobo visitors. Still, he’ll do a couple hours of “pushin’ broom” to get a roof over his head for the night.

I can identify with the experience because I “rode the rails” a time or two in my callow youth but for different reasons. My Dad was the Texaco fuel consignee in Shoal Lake in the late 1950s and 1960s. His office and fuel tanks sat right next to the tracks. The fuel came in by tanker cars, delivered more or less to the site where they could be pumped into the storage tanks. Using a huge heavy pinch bar, Dad and I manoeuvred the full tank cars into exact position, always with some short two by fours nearby in case the car gained its own momentum and had to be stopped.

Standing on the Texaco loading dock when a fast freight sped by, I could smell the hot cinders in the track bed mixed with the acrid aroma of diesel smoke and the swirling dust in the train’s wake, the howl of its whistle echoing in my ears as it disappeared in the distance.

Working with Dad next to the tracks gave me a familiarity and comfort with trains. From that sprang the idea of hitching a ride in an empty boxcar down the tracks to Strathclair ten miles away, hoping the train stopped, then jumping out and hitchhiking back to Shoal Lake. When I was around 12 or 13 I secretly did this a time or two on my own but found it much more satisfying with an accomplice. My cohort-in-danger shall remain nameless but suffice it to say when his parents discovered our escapade and shared it with mine, my train-hitching days ended abruptly and sternly.

I do not recommend this activity to anyone.

Nor do I recommend the following wine and present this as a public service. I have been filling a sidebar on my blog with descriptions of various bum wines lately and here offer the next in the series: Thunderbird 17.5% alcohol by vol.
Look for the pigeon feces and you’ll find this old bird.  As soon as you taste this swill, it will be obvious that its makers cut every corner possible in its production to make it cheap.  Self-proclaimed as “The American Classic,” Thunderbird is vinted and bottled by E. & J. Gallo Winery, in Modesto, CA.  Disguised like Night Train, the label says that it is made by “Thunderbird, Ltd.”  Anyways, if your taste buds are shot, and you need to get trashed with a quickness, then “T-bird” is the drink for you.  Or, if you like to smell your hand after pumping gas, look no further than Thunderbird.  As you drink on, the bird soars higher while you sink lower.  The undisputed leader of the five in foulness of flavor, we highly discourage drinking this ghastly mixture of unknown chemicals unless you really are a bum.  A convenience store clerk in Show Low, AZ once told me that only the oldest of stumbling Indian drunks from the reservation buy Thunderbird.  Available in 750 mL and a devastating 50 oz jug. 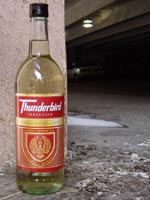 The history of Thunderbird is as interesting as the drunken effects one experiences from the wine.  When Prohibition ended, Ernest Gallo and his brothers Julio and Joe wanted to corner the young wine market.  Earnest wanted the company to become “the Campbell Soup Company of the wine industry” so he started selling Thunderbird in the ghettos around the country.  Their radio ads featured a song that sang, “What’s the word? / Thunderbird / How’s it sold? / Good and cold / What’s the jive? / Bird’s alive / What’s the price? / Thirty twice.”  It is said that Ernest once drove through a tough, inner city neighborhood and pulled over when he saw a bum.  When Gallo rolled down his window and called out, “What’s the word?” the immediate answer from the bum was, “Thunderbird.”
WARNING:  This light yellow liquid turns your lips and mouth black!  A mysterious chemical reaction similar to disappearing-reappearing ink makes you look like you’ve been chewing on hearty clumps of charcoal. http://www.bumwine.com

Hoboes invented a code, a language to use among themselves to indicate the status of various places, people and events. Many carried chalk to leave the symbols when needed. Watch my six-minute video on the meaning of hobo code symbols.

The homeless are the new hoboes. Once they were quiet middle-class people. Now, forsaken, they are in your face on the street. The innocence and fearless swing of Roger’s fine ditty echoes back to a different time, transporting us into a tiny room that smells of cigar smoke, sweat and mold. A dirty sink has one tap that drips onto a rich brown stain that looks like chocolate. Pigeons coo and walk among their own feces on the windowsill. The clang of the midnight train, chuffing and screeing, draws the King’s ear as he smokes in the dark, propped up on the thin pillow on the saggy mattress, a fifth of a fifth of T’bird by his side. He listens and listens and dreams of anywhere but here.