An ice jam upstream from the park caused the Assiniboine River to rise seven feet overnight. Its waters now overflow Highway 5 which is closed for 2 kms in both directions from the bridge. The update says, “Maintenance crews have been dispatched to investigate where the ice jam is located, if it is in an accessible location ice jam mitigation action may be undertaken.” Let’s hope so.

If its flowing over the highway the water is also making its way along the ditches toward the access road into the Spirit Sands trail head and Marsh Lake north of the river and the oxbows to the south. Hopefully it won’t spill over into the lower campground as it did in 2011’s flood. The campground has been repaired over the past two years and just reopened last summer.

If I can get out there next week I’ll report from the park. Below is a picture of how Highway 5 looked after the 2011 flood in Spruce Woods Park. 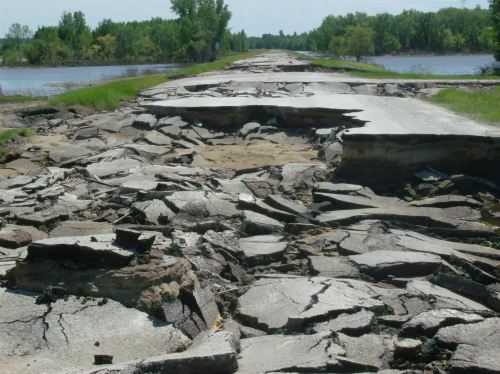 Several secondary roads have been closed due to flooding. You can find current information at http://www.gov.mb.ca/mit/roadinfo/

Otherwise the province has issued a High Water Advisory meaning ice jams along Manitoba rivers, which are just starting to break up, could cause sudden overland flooding. Be especially alert if you live near the Assiniboine or Whitemud.

People living near Whitewater Lake in southwestern Manitoba should know the lake is at a record high level this spring. Provincial hydrologists are monitoring the lake’s outflow carefully. Be alert for possible overland flooding near the lake.

Southern Manitoba received a heavy wet snowfall today. Thankfully it didn’t amount to the 10 cms predicted but there is a fresh coat of snow itching to melt and drain. Areas around Riding Mountain received more snow than southern regions.

The daily flood updates can be accessed at http://www.gov.mb.ca/flooding/news_bulletins.html