During the 1950 Flood, many Winnipeg schools on higher ground were pressed into emergency service. Luxton School became headquarters for the Police, the Navy and the Scotia Street Flood Sufferers Association. Located east of Main Street, the school sits at the top of a steep rise that falls away to the Red River. During the flood, the water rose so high that the Navy docked their boats near the school door.

Luxton was the first school to utilize a modern and safer layout – a wide central hallway with rooms along each side. Previous schools were boxy and three-storeys while the new design was two-storeys with horizontal massing and sprawled out on its large lot.

Construction by building contractor John Saul began in 1907 with the cornerstone laid on September 28. Completed the following year at a cost of $86,167, Luxton School had 12 classrooms and a manual training area. When it opened in 1908, Luxton School employed eight teachers instructing 338 pupils, average class size was 42. In 1920, the school had an average monthly enrolment of 1048. Enrolment in 2014 is 250 students from Nursery to Grade Six plus Special Education.

Luxton School was equipped with the latest technology as recommended by Superintendent Daniel McIntyre and Architect Mitchell. The building was heated by direct and indirect methods of steam heating with mechanical ventilation and an air washer.

Winnipeg experienced a boom time in the early 1900s and as the School Board’s ability to accommodate the influx of new students diminished, schools were often put into temporary use to teach certain grades. In 1909, four of the upper rooms in Luxton School were used for a Technical High School teaching Grades 7 through 9. When St. John’s Technical High School opened in 1912, these students moved there. With the addition, Luxton held Grades 1 to 9 until 1967 when the Junior High grades moved to St. John’s Technical. For a few more years, until 2000, Luxton was a Junior High again.

The building we see today is actually two distinct places, both 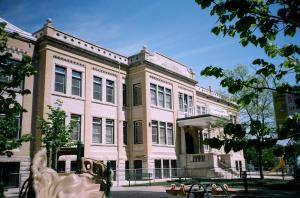 designed by J. B. Mitchell but built seven years apart. The original 1908 section (left and below from 1910) is on the east end and the 1916 addition on the west. Although the designs are similar, the detailing and execution of the 1916 part are better quality. 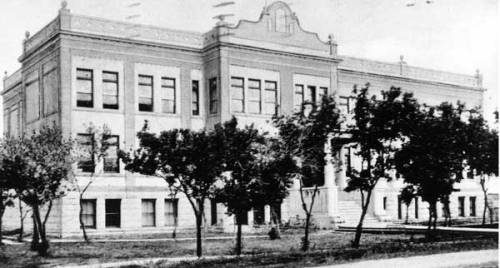 Contractors Worwick Brothers added the eight rooms onto the school 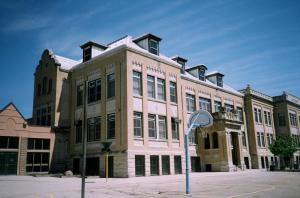 in 1916. Every school on which the Worwicks worked has excellent quality craftsmanship in its masonry, especially in fine details like corbelling, window surrounds and gables. Cost of the addition was $50,479.

In this early picture (above) of the completed Luxton School you can see the differences in styles that architect Mitchell employed on each section. Note the wrought iron cresting along the roof peaks.

Set on a tall limestone foundation Luxton School’s architecture is a mix of Georgian and Classical Revival, two of Mitchell’s favourite styles, both popular at the time. Two pale shades of Manitoba pressed brick, a light tan and a pale yellow, along with Tyndall stone combine to create a subtle palette to which elegant decorative elements were added. The masonry style is American bond with every sixth course of bricks headers. Limestone sills and lintels are used at every window.

The 1908 entry pavilion (above) is an off-centre widely projecting portico supported by smooth round pillars. The original pressed tin remains on its ceiling. A broad and elegant limestone arch frames the double doorway. There is a fanlight over the main entrance.

Above the original entrance (above) on the projecting bay and all around the entire 1908 section the roofline features a low ornamented parapet, short columns topped with orbs and the school name in stone.

whimsy (right), something Mitchell was not averse to including in his designs. A portico with square pillars and an open arcade along each side, thick entablature with a decorated and corbelled parapet and two octahedral urns create an elegant and elevating entry. An arched entrance surrounds the double doors and the school name is carved in stone.

The side entrance uses a variation on a Dutch gable featuring a trio of arched windows surmounted with a bull’s-eye. 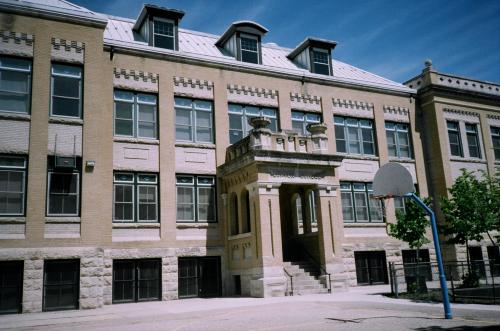 Distinguishing features of Mitchell’s work are a variety of dormers seen here (above) on the 1916 addition only, the attractive limestone parapet with orbs and the corbelling which richly accentuates the head of every second floor window and the base of the cornice. The corbelling on the 1916 addition is different from and much more intricate than the corbelling on the original building. Viewed in full, the school has an aura of stability, promise and hope.

Safety and lighting are always a concern in school design, accomplished here by the extra wide hallways and large windows in every classroom. The wide central hallway with rooms off each side accommodated physical exercises, previously done in classrooms. The classrooms and hallways retain the pressed copper ceilings and some original stained glass windows. 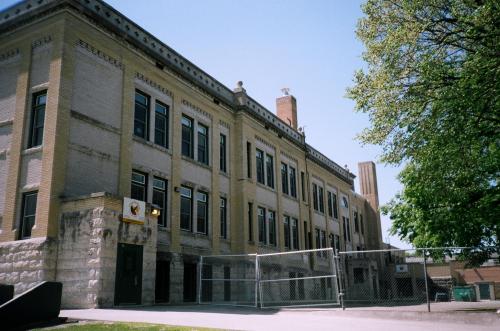 This view (above) of the rear of Luxton School shows the brick detailing was not just for the front facade but extended all around the building.

For fireproofing, the door and window frames leading into stairwells are brass and the original dividers in the washrooms were made of slate. Luxton’s pillar-free auditorium (a rarity at the time) in the basement, complete with hardwood floors, came into use in 1919. Today it is used for the lunch program, Mary Kardash Child Care Centre and the before/after school program.

Contractor Peter Leitch added two more rooms and a gym in 1949 at a cost of $72,150. A newer gym complete with equipment storage, change rooms, showers, phys ed office and a kitchen was built in 1989 by Westland Construction at a cost of $457,410.

The first Home and School Associations in Winnipeg was started at Luxton School and Wellington School in 1915. Luxton got a public address system in 1962.

In 2008, Luxton School was named one of the top 25 best elementary and middle schools in Canada by Today’s Parent magazine.

Illustrious alumni of Luxton School tend toward the arts and show business. Acclaimed novelist Adele Wiseman (left) who wrote The Sacrifice (1956) and Crackpot (1974) attended Luxton as did actor, sportscaster and game show host Monty Hall (right) who is best known for his hosting of Let’s Make a Deal.

A Luxton student, artist and cartoonist Jim Simpkins (right) was one of

the original artists with Canada’s National Film Board and the creator of Jasper the Bear (left) who is still the mascot for Jasper National Park.

as did actress and writer Johanna Stein (left). Watch Johanna perform Stairway to Winnipeg on Mortified.

Luxton School is named after a major figure in Winnipeg’s history, William Fisher Luxton. Born in England, Luxton came to Canada as a child. He learned the newspaper business in Ontario and was sent west as a correspondent. Persuaded to be the first teacher at the first public school in the city, he taught in a log shanty located between Henry

Avenue and Maple Street (now Higgins). Though Luxton (right) only taught for one year at the school, he remained active as a school trustee.

Another of his lasting contributions was the Manitoba Free Press, which he started with John Kenny. It’s first issue went to press on November 9, 1872. The newspaper evolved into the Winnipeg Free Press in 1931.

Luxton died the year construction of the school began. His portrait still hangs in the school. 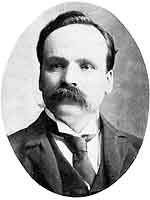 The Lauzon family ran a farm and abattoir on the land where Luxton School sits. They sold it to the School Board in 1906. Jean Baptiste Lauzon (left), a Montrealer, came to Winnipeg in 1876, opened a thriving butcher shop in St Boniface, prompting a second location in the now-demolished Public Market Building behind old City Hall. Lauzon served in municipal and provincial 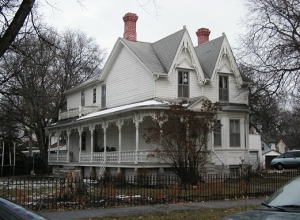 Luxton School celebrated its centennial in 2007.