The new city’s reputation as a “wide-open town” was less than stellar. At its annual convention in 1876, the Young Men’s Christian Association judged Winnipeg and Barrie to be the two most sinful places in Canada with special prayers said for both cities.

One reason for Winnipeg’s sordid image was the result of a lack of potable water. Local well water caused diarrhea and water from both rivers tasted dreadful. A pint of mild ale in one of our many saloons was considered the best alternative for thirst quenching despite its negative effect on Winnipeg’s public image. Barrie’s excuse is unknown.

The first Mennonites arrived in 1874, the first Icelanders the following year and the first shipment of grain left Manitoba in 1876. Winnipeg’s first curling match was played in 1876. The University of Manitoba received its charter in 1877, the same year the first telephone was installed in Winnipeg. (Whom do you call if you have the first phone?) The Louise Bridge opened in 1881, the first to span the Red River providing rail, traffic and foot access. This sparked development in the Elmwood area. Electric lights first lit Main Street in 1882. Ukrainians began arriving in 1892.

School bureaucracy began when the province’s first Legislature passed the School Act in 1871 creating 24 school districts, 12 Catholic and 12 Protestant. In 1890, the provincial Greenway government combined all schools into a secular system administered by a Board of Education with its own minister.

Winnipeg’s first school, a log shanty at Henry Avenue and Maple Street (now Higgins), opened in October 1871 with W.F. Luxton as its teacher. To accommodate the growing enrollment the Board rented two rooms in Fonseca’s store in Point Douglas in 1874 and the following year a wood frame school was built at present-day Notre Dame, Garry & Ellice. The first substantial building constructed as a school was Central School #1. Thereafter Winnipeg schools become increasingly sophisticated. These ten early Winnipeg schools (5 pairs) no longer exist in any form, their names are gone from the current roster of public schools and their bricks and mortar razed.

The first Central School #1, an ornate design by architect Charles A. Barber

Months before construction on Central School #1 began, the School Board had drawn up architectural plans and awarded builder R.D. Patterson the contract for $10,200. The School Board decided in March of 1877 to build on property they bought from land baron and philanthropist A.G.B. Bannatyne (1829-1889) for $5,000. Situated in the West Ward, on the lot bounded by William, Bannatyne, Gertie and Ellen, the imposing two-storey brick building became the first permanent school in Winnipeg.

The design for the school was by architect Charles A. Barber (1906-1975) who had the winning entry on a contest held by the English section of the Board of Education. Typical of the Protestant Board, it was a sensible but lively and ornate Italianate design with low-pitched roof, T-shape and an elaborate belfry with gilded pinnacles. It housed six classrooms, three per floor, connected by a wide stairway. The three upper rooms could be made into one, using folding doors.

Large and plentiful windows were essential to allow enough light into the classrooms. Central School #1 had over a hundred windows in all, many with arched and segmental heads capped with keystone reliefs. The result was bright rooms and an element of exterior lightness. Sometimes, in the dead of winter, classes started at 10:30 a.m. because there wasn’t enough light.

The school did not fill up immediately, allowing the School Board to move their offices into the first floor until they were needed for classrooms. In 1881 the school nearly doubled in size with an eight-room addition and a new bell tower. Over the years major renovations were made to Central School #1 including installation of a central heating system replacing impractical stoves in every classroom.

The railway opened up access to Winnipeg and beyond. The resulting enormous growth in the city’s size and affluence meant that by 1882, student demand required construction of another school on the same lot, Central School #2. When Central #2 opened, #1 became all boys, the newer school, all girls.

Central School #1 was pulled down and replaced about 1898 garnering a new name in the process: Victoria School after the monarch. At the same time, Central School #2 became Albert School, after Queen Victoria’s consort. The new design, likely by Architect and Commissioner of School Buildings and Supplies J. B. Mitchell, was much less ornate but larger than the first school on the site. Victoria School could accommodate 500 students and a teaching staff of 12.

Clean-cut with hints of Italianate style, an impressive three-storey entry tower and dozens of windows with segmental arches, the new Victoria School demonstrated the early design ideas of Mitchell before he transitioned into his own style in the early 1900s.

On March 13, 1930, 400 Victoria School students had just left on noon break when fire broke out in the basement from an overheated beam above the furnace. By five o’clock, a smoldering ruin was all that remained. If the fire had started a little later or a little earlier, it might have been tragic. No one was injured in the fire and Albert School was undamaged. Nearby Maple Leaf School, vacant and awaiting demolition, was pressed into service one last time to accommodate Victoria School students. 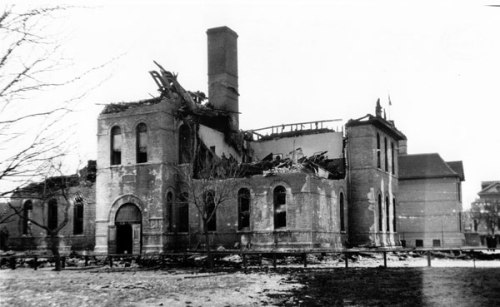 The burned-out remains of Victoria School after 1930 fire.

Out of the ashes arose the school we today call Victoria-Albert School, huge with 24 classrooms. The new school had enough classrooms to educate students from both schools so Albert was closed in 1930 and used for storage until it was demolished in 1951. 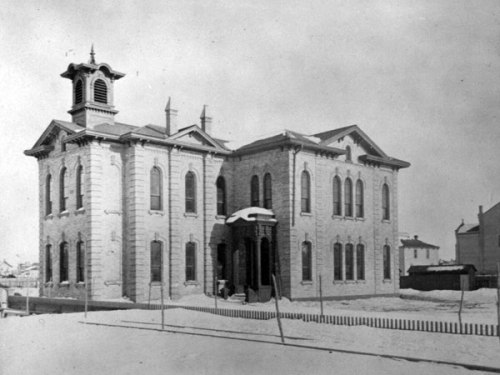 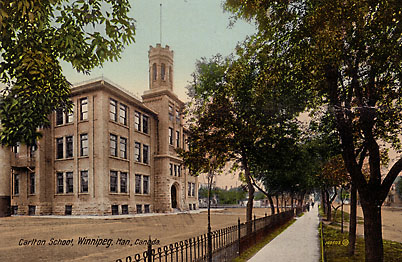 A postcard view of Carlton School #2, built 1903, and its tower with crenelated crown over an open arcade. Note on left the spiral fire escape. There was one on each side of the school.

Two schools bearing the Carlton name were built on this site. The original building, called South Ward School when built in 1880, was the first school in the South Ward, which was comprised of the area west of Main Street and south of Notre Dame.  It became South Central and finally Carlton School in 1883. This brick veneer two-storey building, with many Italianate design features and an eccentric bell tower, was the work of architect Charles A. Barber who had recently designed Central School #1.  Carlton School #1 was the only school in Winnipeg that Daniel McIntyre taught at before becoming Superintendent of Schools in 1885. He was principal there for two years. 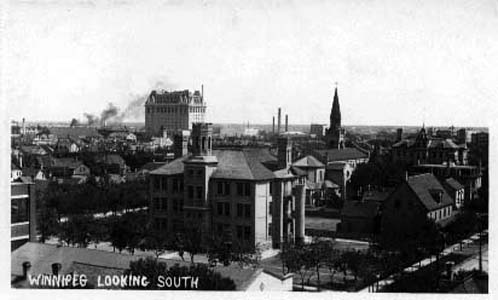 Classic Winnipeg cityscape: Carlton School, the 1903 version, is in the foreground. Notice the spiral fire escape slide on right side of building. To the right is the spire of St Mary’s Cathedral and the Fort Garry Hotel in the left distance.

Too small to accommodate growing student numbers, in 1903 the Board tore down Carlton School, replacing it with a much larger and more modern design similar to Alexandra School. The Board decided that the new Carlton and Alexandra schools would adequately accommodate area students for some time to come.

The new school, designed by Architect and Commissioner of School Buildings J. B. Mitchell, was a fine three-storey tan brick building with a hip roof.  There were pavilions on each side and a massive tower over the front doorway that extended two storeys above the roof. The tower culminated in an open arcade topped with an octahedral, crenelated parapet. A tall flagpole projected from the centre. Limestone was used for the low foundation, accents around the arched entry and up the tower, windowsills and lintels.

Mitchell’s design incorporated the latest in central heating technology, improving greatly on stoves in every classroom. Fire safety and efficient evacuation methods meant most three-storey schools had enclosed spiral slides that delivered pupils swiftly and directly out of the building. Carlton School had two slides, one on each side linked to second and third floors.

As the city developed, rather than being a residential district, the downtown area became dominated by businesses. Carlton School survived until 1930 when it was demolished to become the T. Eaton Company parking lot. The site is still a parking lot.

Find more demolished Winnipeg schools and other Manitoba schools on my Schools page.