The tenth building in our series on Carberry’s historic main drag is a doozy!

Carberry’s local history book states this is among the earliest buildings in town, “established” in 1883. Situated strategically at Main Street and Third Avenue, a major intersection, the Robertson Block, as it was originally known, has displayed its two full facades which demonstrate deft design and skilful brickwork for almost 130 years.  It’s showing its age, mainly with discoloration and the deteriorating stucco job, but still holds its own in commanding attention and supporting the street’s heritage prestige. 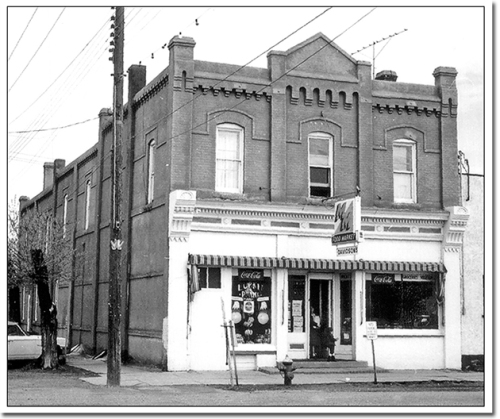 This earlier picture (1960s?) of the block shows the detailed brickwork on both faces along with the elaborate design of the main floor facade.

This brick two-storey, supported by a stone foundation, has a flat roof with a delightful roofline of stepped parapets, raised pilaster capitals and tall chimneys visible due its corner location. The side view facing Third Avenue has a three-bay designation, each bay corresponds to a 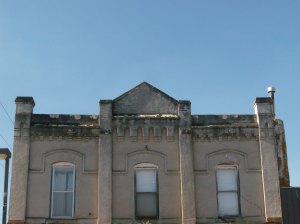 step in the roofline, is bisected with a pilaster and has an increasing number of arched windows with drip moulding.

The building is substantial, more so now that it incorporates the one-

storey structure next door into its current use. The one-storey has been used as a movie theatre and garage and now as part of the grocery store. It was The Palace movie theatre starting in 1940 when bought by Mr. and Mrs. J. J. Baldwin. It played to packed houses every night with R. A. F. training personnel. In 1953 Muriel and Gordon McPhail purchased the theatre and made improvements. As with many rural movie houses, TV put the kibosh on The Palace. Its last incarnation was known as North Cypress Theatre.

During its thirteen decades, the corner building has housed pioneer merchants, implement dealers, butchers, rental meat lockers, a World War II service club for personnel stationed at the RAF flying school that operated nearby and a grocery. In its early incarnation as the A. Robertson Block, the two-storey store housed Robertson’s Furniture Store for many years. Later it became a butcher shop run by W. D. McMillan who sold it in 1964 to Ken Davidson, another butcher. Davidson’s Meats offered locker plant services to Carberry residents before home freezers became available in the late 1950s. Today, durably, it is still Davidson’s Meats and Grocery thus earning its current moniker The Davidson Building.

Just before they were married in the summer of 1918, Pa Tuckett rented a pretty little cottage on Dufferin Street in Carberry for him and his new bride. That fall he added a white picket fence. Alex Robertson had his furniture store in this building at the time so Pa and Amelia bought furniture for their first house. They only bought the basics: a table, two chairs, one lamp and, of course, a bed.