As John Lennon would say, today is a “red lettuce” day in the history of Linda and Reid. On this date, 35 years ago, we formally amalgamated our households 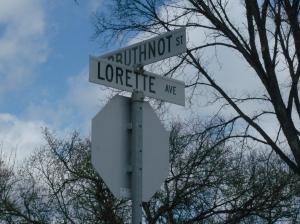 and our lives by moving into a small house at 729 Lorette Avenue in Winnipeg. Since we had fallen madly in love, the move was inevitable. It was an usually hot April day, at least for back then, as the temperature soared into the 80s. Sweat was pouring off us and my friend Ted who helped with the move but we managed to clear out two apartments and find space for our combined stuff in the little house.

The house had been a rental property for some time before we moved in and had been reasonably well-maintained. I think we paid $130 a month for it

which was appropriate. It became our “one-and-a-half-storey utopia” as we called it, alternating with “the boxcar” because it was long, narrow and open. This picture shows 729 Lorette in 2010 just before it was demolished. It hadn’t been lived in or heated for several years and was deemed “unihabitable.” It had served its purpose, satisfied intent and provided all its shelter.

About Lorette Avenue: it’s a Winnipeg anomaly, a “hermaphrodite street,” as Guy Maddin calls it in My Winnipeg (See this movie please). The front yards of one side of the street, our side, face backyards across the street. This odd bit of urban planning goes on for a couple of blocks then shifts over a block then

dissolves into correct property lines. “No one speaks of Lorette Avenue,” again from My Winnipeg. This is the view directly across from 729 Lorette today.

Putting Lorette Avenue’s hermaphroditic charm to use, during the hot summer of 1978 I shot a fast frame Super 8 film out our front window into the backyards across the street. It wound up with a great Pere Ubu soundtrack, a song called Go, and is a popular choice on my DickTool channel on YouTube. Catch a glimpse of Lorette back then.

Linda and I lived on Lorette for two years, making our early art together – photography, films, collage, video. You can find the detailed chronological history of our artlife on my DTC Art page. Some of our strangest video art ensued from the Lorette house. Videos shot on Lorette include Cheap Grace,

No Shirt No Shoes No Service, The Yard, Evidence of Winter and Video Shoes. The Super 8, Passionate Leave, was also shot there.

The little house was demolished and replaced with a spanky new duplex over the past year. This is what stands at 729 Lorette Avenue today.