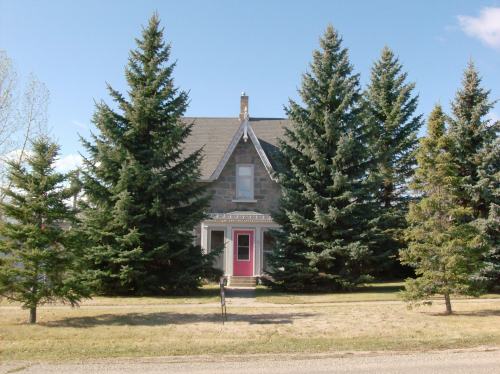 Situated on a quiet street and peeking shyly from behind luscious evergreens, this dignified fieldstone house sports several rather rare Gothic Revival touches. 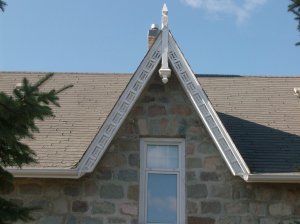 Beyond typical Gothic features of its steep  front gable and rectangular, symmetrical massing, this two-storey house features elegantly elaborate bargeboard (under the gable) in a pattern that is replicated on the low balustrade around the porch roof. The peak of the gable has both a pendant  hanging below and a pinnacle pointing upward, lovely features with the pinnacles repeated atop the side gables. 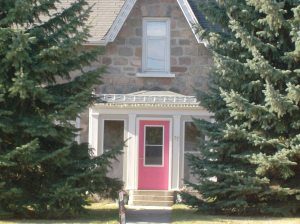 Porches on heritage buildings can be tricky and either add to or detract from the overall design and feeling. This porch, painted white to contrast the grey and reddish stones, adds further elegance to the place. The columns on the porch suggest Classical Revival architecture. The little balustrade on the roof is precious.

The side view illustrates the symmetrical fenestration with subtle sunbursts above

each window. You can see the pinnacle at the point of the gable end and the attractive mottle of the fieldstones.

The Minnedosa Heritage Committee states the house was built in the 1890s for Joseph and Edith Burgess who raised their 11 children there. Joseph established the Burgess store in Minnedosa in 1896. Burgess Quality Foods still operates from the same location today. The house has changed hands several times over the decades with very sympathetic restoration being done after 1985.