Pictures of an Amazing Year

This is a sample of my first batch of 2011 travel pictures. Taken in the Big Muddy in southern Saskatchewan, an enduring symbol of hard pioneer life still stands atop a rise surrounded by crop.

I have uploaded the first 56 pictures from my various travels over the spring and summer onto the DickToolCo page on Flickr. They include shots of Vancouver in the spring, a series of cityscapes of downtown Winnipeg taken from the rooftop of the Fort Garry Hotel in mid-May, flood pictures of Brandon, Melita and the flood protest rally held at the Manitoba Legislature in June. During Doors Open I took a series of pictures of the Ukrainian Labour Temple in north Winnipeg. I always snapped pictures during my many trips to Souris covering the flood. Plus several shots from my July travels in Saskatchewan. Some of the pictures are along the right hand sidebar on my blog. All my pictures are here. Enjoy! 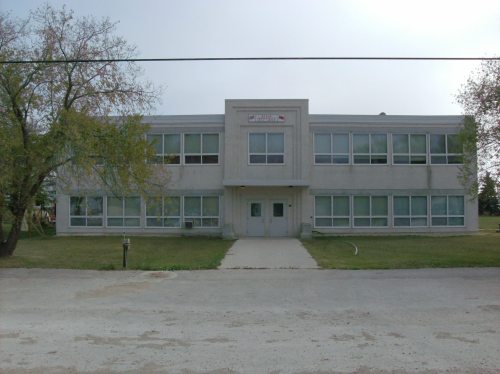 By the 1950s, consolidation of the Manitoba educational system had all but eliminated the need for local one-room schools. Centralized facilities were considered more effective and efficient. New schools were built to meet this need.

At the same time, new design philosophies were being brought to bear on school building design. Built in 1951, a basic wood-frame structure covered with stucco, Fannystelle School is just such a building, a model example of “the new” for its time. It was Modern.

The Modern movement toned down the already smooth and luxurious Art Moderne style to its basic straight lines that cooperated with the landscape. Crisp and sleek, characterized by unadorned flat symmetrical surfaces (it’s nothing if it’s not symmetrical) and horizontal lines, the Modern style was used on many schools. On Fannystelle School the horizontal lines begin with the flat roof and continue with a plain straight cornice, the belt course above each row of windows, the 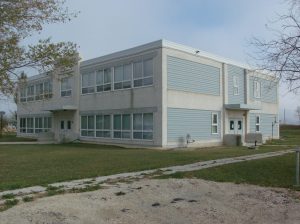 large paired windows, canopies above entrances and shallow foundation, all give the place a low profile that fits with the flat prairie surrounding the school.

The stepped detail around the front entrance and centre pavilion welcomes you into the building. The use of two colours, one providing the building’s detail and the other the basic

colour, was a common and simple technique of the style. The fenestration is generous and adds to the style, offering large windows to flood the classrooms with light. The slightly wider mullions separating the pairs of windows indicate walls between the school’s eight classrooms.

The building is now owned by the

Manitoba Housing Authority and has been divided into apartments although the exterior remains as you see it in these picture taken in October 2011.

The little village of Fannystelle, besides having an enchanting name, has an unusual genesis, according to Geographical Names of Manitoba: “Fanny Rivers worked among the destitute and homeless in Paris and through her work met Parisian philanthropist Countess Albufera. The Countess persuaded her husband to finance emigration of poor Parisians to Canada. Fanny Rivers continued her work in Canada but died 1883. The Countess founded this French settlement in 1889 in memory of her friend. T.A. Berbier (later senator for St. Boniface) was trying to encourage more settlers from Quebec to come to Manitoba and join the nobles and well-to-do gentleman from France who formed the nucleus of the community (many of whom later returned to France). The village was described as “an island of French culture in the middle of a sea of English” and it was said that “the Countess seems to have decreed that her colony be called Fannystelle – Fanny’s Star.””

Find more stories about Manitoba schools on my Schools page.