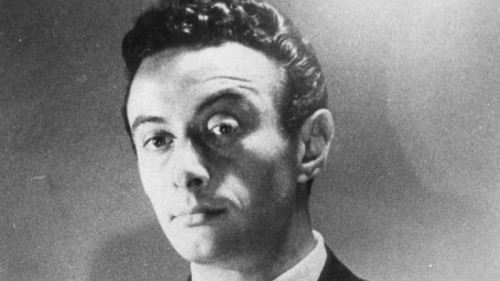 If Lenny Bruce had not been born on this day in 1925, today’s comedy would all be shtick and bullshit. Because of Lenny, today’s comedy is one of the few places you can hear the truth. Here’s more of Lenny’s truth: “Today’s comedian has a cross to bear that he built himself. A comedian of the older generation did an ”act” and he told the audience, ”This is my act.” Today’s comic is not doing an act. The audience assumes he’s telling the truth. What is truth today may be a damn lie next week.” and “Every day, people are straying away from the Church and going back to God.” and “I won’t say ours was a tough school, but we had our own coroner. We used to write essays like: What I’m going to be if I grow up.” and “The only truly anonymous donor is the guy who knocks up your daughter.” Not Dead/Dead since August 3, 1966. One last thought from Lenny, “I’ll die young, but it’s like kissing God.” Watch Lenny on stage just before he died or listen to him riff on kids sniffing airplane glue.