This article, minus the Dauphin update, originally appeared in Crossroads This Week in 2004 under the title The Treasure in the Middle of Town. Today it also appears on my blog about my hometown’s history www.shoallakehistory.com

What do Kodak Brownie cameras, bullet trains, Spartan radios and the Central S building in Shoal Lake have in common? The answer: the same person, an innovative American industrial designer named Walter Dorwin Teague, designed them all.

Teague’s most popular camera design for Eastman Kodak was the Bantam Special. Perfection!

From Pendleton, IN Teague worked as an illustrator and commercial artist, notably for Time magazine. A trip to Paris in 1926 exposed him to new ultra-modern designs and materials that captured his imagination. Hired by Texaco to design service stations, Teague employed architectural elements from the Art Deco and Art Moderne schools. The Central S building is a classic example of this style and one of the few remaining in western Canada.

The building, on prime real estate at the intersection of Highways 21 and 42 in the centre of Shoal Lake, was constructed in 1936. It opened for business on July 31 of that year as the Red Indian Filling Station, the brand name used by the Frontenac Oil Company. Formed in 1873, the McColl-Anderson Oil Company in Toronto consisted of a refinery and lubricating oil and grease facility. Around the turn of the century, they shortened the name to McColl Brothers. A merger with Frontenac Oil in 1927 gave the McColl-Frontenac Oil Company Canadian operations from coast to coast. About this time, Texaco began acquiring shares in Frontenac, gaining control of the company in the early 1930s. In 1941, they formally changed the name to Texaco and the brand to Sky Chief and Fire Chief products.

Texaco service stations became a common site along highways all over North America. Unmistakable they had bright white stucco finishes, forest-green stripes and large red three-dimensional stars around the upper area below the roof along with a freestanding signpost bearing the red Texaco star logo on a white disk.

Teague created two designs for Texaco service stations: a small one like the Shoal Lake building, and a larger example with a breezeway supported by angled pillars that covered the pump area. The prominent decorative detail was the large, 3-D red star taken from the Texaco logo and duplicated on the company’s uniforms, prompting the advertising slogan “You can trust your car to the man who wears the star.” There were about 10,000 such service stations on the continent by 1950, most of them in one of Teague’s two cookie-cutter styles.

Teague’s industrial projects always represented the dynamic progress of the 20th century, the streamlined machine esthetic suggesting motion and speed, denoted here by the jutting rounded tower bearing the company name. Elements common to Teague’s designs are all evident in the Central S building: flat roof, rounded corners, symmetrical facades and raised signage, both modern and economical at once. Front doors on both sides of a protruding curved entranceway compliment the double service bays. There was another bay entrance on the east side of the building. Inside was a small storefront area, office and storage behind that and the service areas on either side joined by a wide, open backspace.  The building, though small, gives the impression of stability and confidence. Yet there is a charming lightness and optimism to the design that appealed to the newly mobile to “Trust Texaco.”

The large version of Teague’s Texaco stations with breezeway.

Owned by Texaco until 1953, the service station was leased to Dean Brothers, Mr. Burns, Roy Garlick, McLean’s, Mr. Kashton, Louis Bart and John Byram. It was bought in 1953 by John Decelle who operated it until 1960. The small furnace room at the back was added on during this time. Roy Garlick ran it for a few years, followed by Doug Susinski, Don Wiburg and Bill Schwaluk. With the absorption of Texaco into Chevron, Bill Stebnicki bought the building in 1987 and it became the Central S convenience store. Today Mickey and Yvonne Shust are the proprietors.

Nothing says turn up the tunes, point her toward the vanishing point and step on it like an old Texaco filling station!

Previously I have posted about the Art Moderne Texaco filling station in my hometown in western Manitoba and its designer, Walter Teague. I have few old pictures of the place as it appeared back in its heyday as the Texaco gas station in Shoal Lake. Today it still serves relatively the same purpose. The garage and tire repair are gone, replaced with a convenience store called Central S. You can get gas, wash your car and buy a Pepsi, too. Plunked down in the middle of town, it is still the best location in Shoal Lake.

I recently took pictures of how the structure looks these days. Even though it is completely covered in grey vertical cladding, almost every detail from its original design can still be seen on the building. The rounded corners on the building, the roof and entrance, the prominent stepped signage, the symmetrical windows where the garage doors were, the darker trim at the cornice and around the projecting sign, all still visible, all smooth

and optimistic, all telling you that the future is bright! Despite the matching grey Manitoba sky beyond, the colour has a warm, an inviting neutrality. I had forgotten that the building isn’t square on the lot. “It’s squee gee,” as Mom would say. It doesn’t parallel the facing street, The Drive, but tilts slightly toward the intersecting Station Road, Shoal Lake’s main drag. 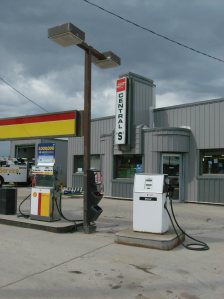 Rarified 21st century mists of Art Moderne still lurk about the old place, passing along pleasing reminders of gentler, less-pre-occupied times to anyone who can slow down and notice them. Take a deep Art Moderne breath, old friend. You’ve earned it.

As a fine example of Art Moderne architecture, the building stands among a dwindling number of such historic places left in Canada. Its geometric form, precise location for striking visual appeal and the renown of its creator conspire to make this a little treasure worthy of preserving.

I’ve known about it for years and finally got around to photographing a twin to Shoal Lake’s service station, this one in Dauphin, MB also designed by Teague. Built in 1936 and formerly Greening’s Garage it now houses a computer business. The sweeping sign with the rounded receding corners prominent at the front, the flat roof, the horizontal lines, and sleek, sensuous curves of the building overall suggest movement and speed to match the modern automobiles. All this is evident in the Texaco picture, the same as the Shoal Lake version. 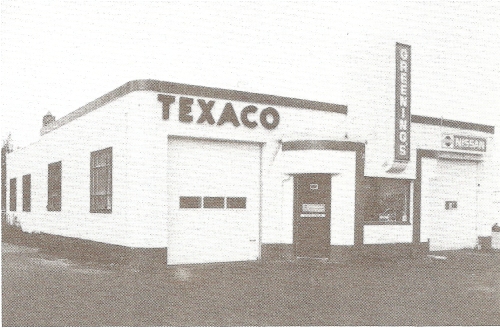 Today most of the openings have been closed and the place stuccoed but the sign is still the same. Although covered over, the rounded front entrance remains intact and the paint job kept the horizontal stripe along the roofline, two distinctive elements of the style. Originally set back from the street to accommodate gas pumps, without the pumps it still stands out positioned on a street corner. By the way, the company Walter Teague started in 1926 is still going strong today creating innovative and award-winning industrial design. 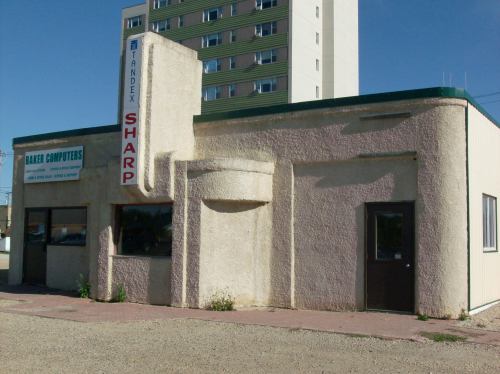 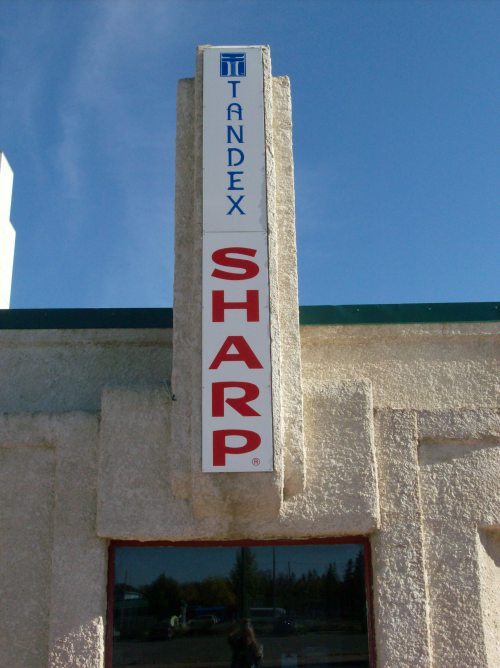