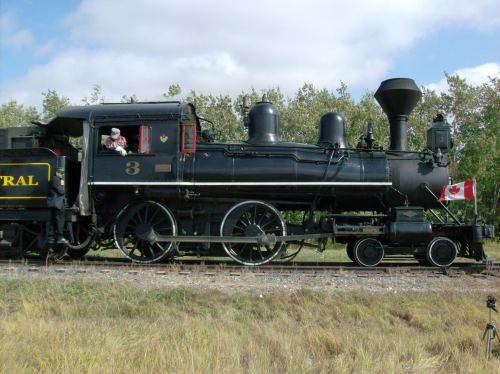 Operated by Winnipeg’s Vintage Locomotive Society, the Prairie Dog Central has been offering the experience of an old-fashioned steam train ride since 1970, making it one of the oldest regularly scheduled steam trains in North America. The locomotive was built in 1882 and worked the rails between Fort William (Thunder Bay) and Vancouver for decades. The rest of the rolling stock – the passenger coaches and caboose – was built between 1900 and 1912. On one of its last trips of the year, I caught the PDC taking a Sunday run out to Grosse Isle, MB. Smell the smoke, hear that lonesome whistle blow, feel the soothing rhythm of the tracks and enjoy the Prairie Dog Central. Gone from modern trains, the Prairie Dog Central still sports a caboose.