Both Estevan and Weyburn in southeastern Saskatchewan remain in a Local State of Emergency, but the sun is shining and a warm breeze blows over the prairies today, both helping to dry up the local areas. These pictures show what Weyburn looked like a week ago. 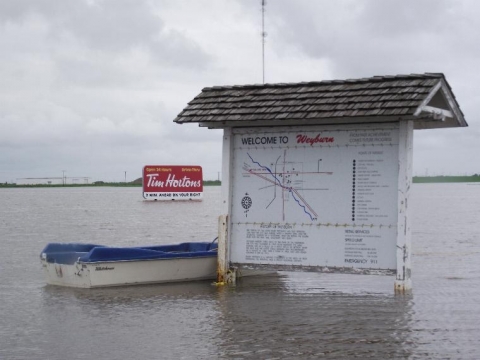 In Weyburn the berms built right downtown to dike the flooding Souris River have been removed, streets are water-free and Highway 39 is open again. Weyburnians remain in a state of emergency, declared June 17, because their drinking water is still not safe; the precautionary boil water advisory is still in effect. Their water treatment plant had failed due to flooding but three of the four pumps are now up and running at the lift station and normal conditions prevail. A few more rounds of testing are needed to determine if the water is safe to drink again. Evacuated trailer court residents have been allowed to return home.

Estevan, too, remains on high alert although one of the threats to them is subsiding. Both the Boundary and Rafferty Dams outlet flows have been decreased, good news since there was concern both dams were in jeopardy of breaching due to huge volumes behind them. This aerial view of Estevan Golf Course shows it is one big water trap. 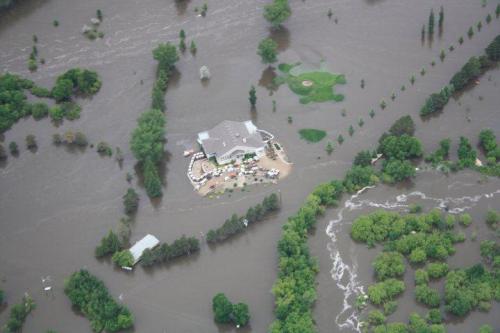 Estevan is housing evacuees from the area, especially around Roche Percee. The Reception Centre at the Civic Auditorium continues to accept registrations for local flood evacuees. The contact number has changed to 634-1915. The Souris Valley Aquatic and Leisure Centre is open to the public.

Travellers in the region are strongly encouraged to contact the Highway Hotline before setting out. As of today:

With cooperation from the weather – there appears to be little rain forecast for the next five days – Saskatchewan will have a chance to dry out. People are starting to feel some cautious optimism.

One response to “Saskatchewan Flood Report #2”