After receiving over 120 mm (about 5 inches) of rain in two days, Weyburn, SK is under a state of emergency due to flooding downtown, failure of their water treatment plant and continuing heavy rains. 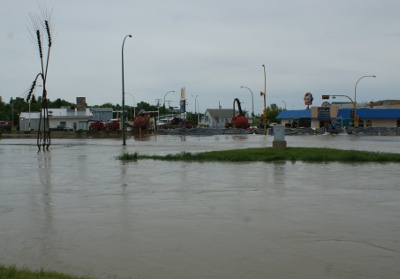 City water has been declared undrinkable and dangerous with a boiling directive in place. I stayed in Weyburn at the Canalta Inn and Suites on Sunday night, arriving late afternoon about the same time as a thunderstorm with heavy rains began. It rained most of the night as over two dozen pumps and fire trucks tried to move water from the south side of Hwy 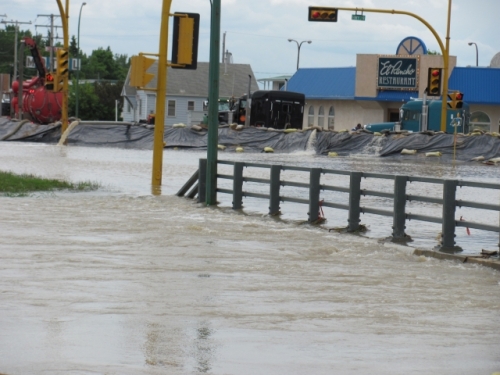 #39 to the north side so it can drain into the Souris River. Emergency vehicles sped past my room all night. The flood arrived quickly and thoroughly in Weyburn. Most downtown businesses were closed with Boston Pizza being one of the few exceptions. Bottled water was scarce, even Wal-Mart ran out. The look of concern on the face of the front desk clerk at the hotel spoke volumes about the local worry. They weren’t renting rooms on the first floor that night “just in case.”

Down the road in Estevan, SK things are getting worse. I stayed in Estevan at The Derrick on Monday night. A small lake formed behind the hotel and inched slowly toward the building while it rained all night. A trailer park has been completely evacuated, homes have been lost, both dams that face into the city are under the duress 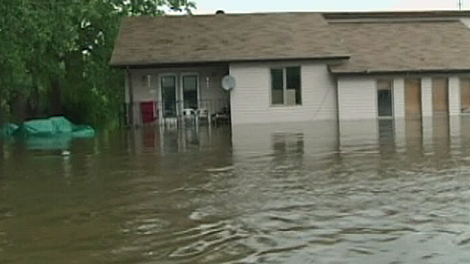 of unequalled amounts of water and it continues to rain. Boundary Dam holds back the water of Long Creek and is Sask Power’s largest thermal generating station and the largest lignite coal-burning station in Canada. The Rafferty Dam holds back the Souris River forming the gigantic Rafferty Reservoir which stretches northwest for 57 kms.

Both dams are at their max as far as volume of water in their reservoirs. To relieve some of the pressure on the dams, record amounts of water are being released from both dams. This water becomes the Souris River. Estevanians fear that if either dam breaches, the city is in big trouble real quick. Highway #47 south of Estevan is closed due to flooding as is Highway #18 west of Estevan.

Meanwhile, just downstream from Estevan and the dam outlets is the little village of Roche Percee, situated on the banks of the engorged Souris River. 180 people have been evacuated and at least half the homes in the low-lying portion of the village are believed to be almost completely underwater. 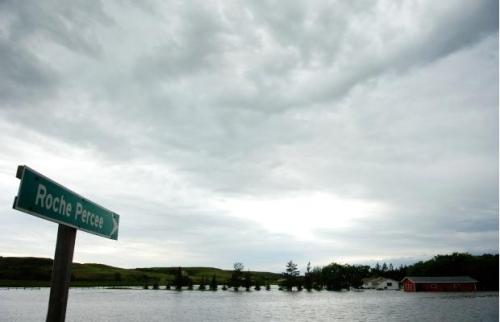 “It’s just numbing. It’s out of our control,” said Coalfields RM administrator Valerie Pelton. “It’s not a slow scar or a slow burn. It’s all happened so quick. We’ve got lots of families very seriously stressed. There’s a lot of numbness and people just don’t always know what to do. We’re not even sure if Roche Percee is a place people will ever be able to go home to.” 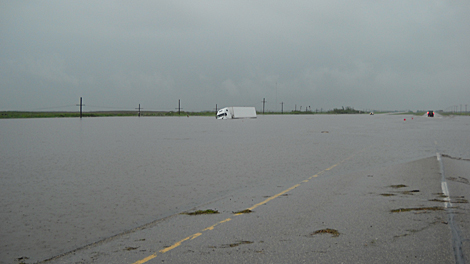 A 150-km section of the Trans-Canada Highway is closed in Saskatchewan, due to water over the highway. The closure stretches from Whitewood to Balgonie with traffic detouring via Highways 9 and 10. Local traffic can access Sintaluta and points west from Balgonie, and Wolseley and points east from Whitewood.