…the paper it’s printed on.

” Let us not be satisfied with just giving money. Money is not enough, money can be got. Let us more and more insist on raising funds of love, of kindness, of understanding, of peace. They need your hearts to love them so spread your love everywhere you go.” – Mother Teresa

From the Things-To-Give-You-Pause-and-Perspective file: My friend Chris has a eye-opening post about what money and debt actually is on his blog today at http://loveartandfear.com/2011/05/23/8-things-you-may-not-know/

The heavy rains that fell Saturday are making their way through the river system causing some concern and slowing the water’s decline in most places along the Assiniboine. The major concern is about inflow from the Souris and Qu’ Appelle Rivers and how it will affect dikes and drainage downstream. In Brandon, where river levels have been dropping about 6 inches a day, the decrease was minimal yesterday and today due to the rains.

Since the water diverted north from the Assiniboine into Lake Manitoba has to go somewhere, it is causing major flooding around the shores of the lake and residents are still scrambling to protect or evacuate their properties. Today many of the best cattle producers in Manitoba, six First Nations and dozens of cottages around Lake Manitoba are flooded due to dumping more water than the lake can accommodate. Lake Manitoba’s outflow at Fairford is totally unable to handle the inflow from the Diversion thus producing scenes like this. 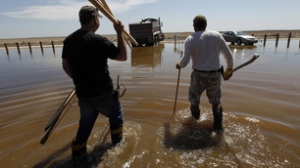 Some Manitobans are accusing the provincial government of reckless abandon for mismanaging the flood situation then off-loading blame onto bureaucrats and generally acting like clueless idiots. The government even took out half-page newspaper ads last week to shuffle blame away from themselves. The Black Rod wrote a fine piece this week about Premier Selinger that sums up his self-inflicted and well-deserved dilemma. Read it here. 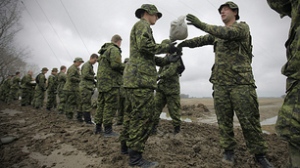 continued flood responses around the Portage la Prairie area” as stated yesterday by Manitoba Water Stewardship. It’s the newly flooded properties around Lake Manitoba that need sandbags and the troops right now. It was reported last week that today would be the last day the military would be involved with the flood fight, just when they are needed most around the lake! Whether that is actually the case remains unknown at this time.

The provincial government will announce its compensation package for flood victims tomorrow. Also tomorrow I will have a new update on the flooding at Spruce Woods Provincial Park and the prospects for opening the park this year.

Linda and I loved to garden together. We found it restorative and invigorating. Linda was always taking pictures of our flowers, plants and garden views. She had an amazing eye! I have just posted 39 photographs she took of various gardens in recent years on Flickr. Here are three samples and the right-hand sidebar has ten more. Click to enlarge.

The rest of Linda’s Garden Pictures are here.