The First Time I Heard “Eleanor Rigby” by The Beatles

It was a Friday, August 5, the day after my 17th birthday, 1966. My after-school and summer job at the Shoal Lake Locker Plant mostly consisted of stocking shelves and sweeping up. Once I turned 16, my other duty was delivering groceries around the little town to people who’d called in or were too elderly to carry them. The store had a Chev they’d knocked all but the driver’s seat out of, making room for the deliveries. I piled in the bags of groceries with the family names written on them. I was expected to know where everyone lived and I did. It was a small town.

I enjoyed getting out of the store, driving around my familiar little town listening to the radio. CKY, Canada’s Friendly Giant, 50,000 clear channel watts out of Winnipeg, had been shouting all day about having an exclusive on the new Beatles single and would play it at precisely 4:55. The DJ kept telling us we wouldn’t believe our ears. They wouldn’t even tell us the name of the song. I was a zealous fan. The Beatles defined and informed a large part of my youth. I was excited.

Setting the stage musically for Eleanor Rigby‘s arrival, the previous five singles The Beatles released were Paperback Writer/Rain, June 1966, Nowhere Man, March 1966, We Can Work It Out/Day Tripper, December 1965, Yesterday, September 1965, Help, August 1965 – solid rock tunes but for Yesterday, with plenty of chiming guitars and backbeat, each a musical advance showing growth. The Beatles loved to surprise us but I was completely unprepared for what was coming next.

The day was hot and I was sweaty in the old car but the breeze felt cool and in a few minutes there would be a brand new Beatles song in the world. Life was good!

Just as I was pulling into Richcoon’s driveway, as relentlessly promised all day, CKY announced they would play the new Beatles 45. I sat in the Chev, fully baited. Eleanor Rigby played. The announcer said he was going to play it again and did. The voices were right but not a guitar or drum within earshot, instead a string octet supporting a wailing tale of desolation and woe. Nothing like this had ever happened before! My little Shoal Lake Locker Plant delivery boy’s mind was blown right there in Richcoon’s driveway. I carried, rather floated the groceries to their door, got back behind the wheel of the Chev and just sat there, confused, queasy, thinking, “Is this the end of the world?”

Eleanor Rigby was one of the first story-songs The Beatles, usually Paul, wrote. Norwegian Wood on Rubber Soul hinted at the future but their little movies continued with When I’m 64, Penny Lane, Bungalow Bill and so on. There is a tombstone in a cemetery in Liverpool, England with the name Eleanor Rigby on it. Whether McCartney knew that and used the name intentionally isn’t known. He claims the first name he tried in the song was Miss Daisy Hawkins but eventually named it Eleanor after actress Eleanor Bron who starred in The Beatles movie, Help.

Revolver, the album Eleanor Rigby came from, was released the following Monday, August 8 and provided a radical setting for The Beatles new eloquence and their increasingly precise pop sensibility. An instant classic, Revolver is at the top of many people’s all-time favourite album lists, including mine. Timeless yet surprising pop songs, quantum leaps in story-telling and sonic adventures combine to make Revolver a stunning achievement in pop culture. 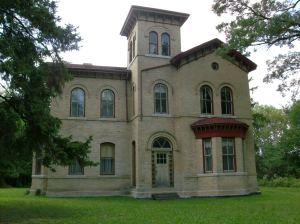 Another Italianate beauty in southern Manitoba! Built in 1880-81 on the north side of Emerson between Second and Third Streets, lawyer, real estate broker and municipal official William Newton Fairbanks spared no expense constructing his mansion. A true and wonderous example of the Italianate Villa Style, which was just becoming popular in North America, the pile sports low-pitched roof,  tower, extended eaves, arched windows, angular bay windows and a sense of Mediterranean wealth.  Constructed of “Emerson” brick – distinctive yellow brick with pink undertones – produced in Emerson’s early brickyard. The house had been the residence of the Forrester family for over 100 years. Today it stands empty and unprotected by any kind of historic designation. 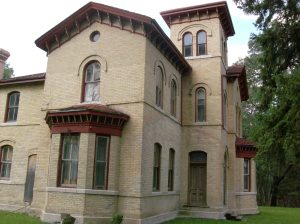 Long abandoned but well-lived-in, this humble pioneer home is slowly being absorbed into the prairie from which it originally arose. Thousands of basic woodframe homes like this one were built across Manitoba. Spartan and practical, they were constructed of local materials, used family and local labour and served generation after generation. Today many of them still wilt away in the heat and cold, their former inhabitants obscure, their builders long forgotten. I have no idea about the origins of this house but its history probably includes conceptions, births, stillbirths, ecstasy, death, grief and love. The house is located southeast of McCreary on the east side of Riding Mountain National Park. The only vestige of Glenhope remaining is this church across the gravel grid road from the house, St Mary’s Ukrainian Catholic Church, built 1918.

This view shows another old building once part of the yard. The house, tumbling down atom by atom, is surrounded and almost overgrown by the windbreak. 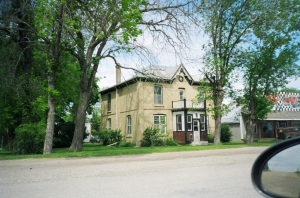 American Foursquare was popular from the late 1800s until about 1930, combining elements from other architectural styles to dress up its simplicity. Many of the same elements Frank Lloyd Wright used can be found on American Foursquares. Sometimes called prairie box style, the houses were a simple box shape, two storeys with each floor having a four-room floor plan (thus the name), a low-pitched hipped roof with a large central dormer and deep overhang. This buff brick example may once have had a wide porch. The dormer is visual feast, elaborately decorated with delicate bargeboard and the bull’s-eye window behind. Decorative features are the overbuilt corners, the small belt course of raised brick between the floors, the carved elegant brackets under the wide eaves. The style was practical in several ways: the houses fit nicely into small city lots and their simplicity meant they could be sold as mail order house kits by Sears and Eatons. The metal roof cresting tops this lovely well-maintained house. Though the colour scheme and materials of the front porch do not complement the rest of the house, the place overcomes this minor glom and presents a solid and stately elegance, a quiet history of service to generations.

Quiet eloquence, Queen Anne style is once again represented in this handsome brick house, one of three fine homes that grace this Brandon intersection. Built in 1905 for William Burchill, co-owner of Burchill and Howie Meat Market in the Burchill Block on Rosser Avenue, its roofline is distinctive with its steep hipped roof descending into the rounded porch cut with an impressive dormer and small balcony. The semi-circular window beneath the clipped gable end adds further visual interest. Every opening has a sunburst header. This house has a twin at 322 11th Street in Brandon.