This has been one of my Links since the birth of my blog.  Modern thinker and philosopher Ken Wilber is a lifelong meditator with amazing control over his consciousness. I have admired his work and his important teachings for a dozen years, finding him quite helpful in understanding what states of consciousness shamans access. His book, A Brief History of Everything, is a useful introduction to his work. But first,  just click on Ken’s pic and he’ll stop his brain waves for you. 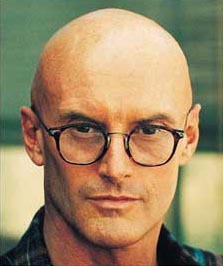 Its distinctive image appears on Manitoba’s flag, life-size bronze replicas flank the Grand Staircase in the Manitoba Legislature and restaurants all over the province offer its tasty healthy meat on their menus. If Manitoba has a heritage animal, the bison is it, MTS advertising notwithstanding.

In 1800, sixty million bison freely roamed the Central Plains. By 1865, 15 million remained, just 7 million in 1872. In 1900, one thousand bison were left in the world.  Brought from the edge of extinction by the efforts of an unlikely combination of visionary people, bison still roam the land, numbering 19,000 in Manitoba, most of them on farms. Two small display herds, one near Lake Audy in Riding Mountain National Park and one at Fort Whyte Centre in Winnipeg, total 50 animals. 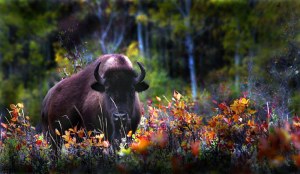 The life of a bison today isn’t much different than it was thousands of years ago. Farmed but not domesticated describes the current bison population. They are back at home on their native range, preferring to be left alone in large roaming areas. They feed on similar grasses as their ancestors and grow to full maturity in about two years. In Manitoba, 120 farms produce bison, seven of them on First Nations.

“It’s a healthier meat, lean and tasty, low in calories and fat, high in protein,” says Chopp. “Bison aren’t subjected to drugs, chemicals, growth hormones or steroids because they are fed naturally and grow naturally. We keep them in their natural state.”

Chopp has seen a change from breeding stock being more valuable than the meat to just the opposite. The meat sells these days. Despite a decrease in the number of bison producers in Manitoba over the past few years, herd numbers have remained steady.

“The average Manitoba herd numbers about 200 animals,” says Chopp. “A few producers run 3,000 head and some just a few dozen.”

New markets and opportunities are opening up for bison producers. Active promotion means bison is sold in more local grocery stores and served in more restaurants than ever before. People have acquired the taste.

“Here in Manitoba many producers are also active marketers. More brokers and distributors are promoting bison meat, getting it into stores,” says Chopp. “Demand is growing worldwide with markets opening in other provinces, the US and Europe.”

Prehistorically, the bison was a shopping mall on the hoof. No part of the animal was wasted. Today, besides the meat, bison hides are tanned for leather goods. First Nations people use skulls and other bones ceremonially.

Asked about his feelings for his herd of heritage animals, Chopp said, “It makes me proud to raise these majestic animals. It’s a good feeling to have contributed to restoring them back to a reasonable number, that they are safe from extinction.”

Prehistoric bison culture was recently recognized with the development of the Clay Banks Buffalo Jump on Badger Creek just north of Cartwright. A viewing area across the valley provides information on the 2,500-year history of the site.

Are they bison or buffalo? Leonard Chopp says they are both. “It’s personal preference.” Whatever you call them, the next time you come across bison meat in a grocery store or on a restaurant menu, try it. Think of it as a heritage food.