UPDATED: I found three pictures with captions from the Winnipeg Tribune from 1951 and added them on April 10/14.

Several people with whom I spoke about Rooster Town stated it was a sad and sorry chapter in Winnipeg’s history, the shame of the city and one of many untold Winnipeg stories. Though this is not the forum for an in-depth account of Rooster Town, here is a tantalizing teaser about Winnipeg’s own barrio.

Winnipeg was cut from bush that grew thick and wild along the riverbanks and well beyond. The land was covered with native brush and savannah – open range dotted with bluffs of trees. To trace the physical development of Winnipeg as it was laid out on the prairie, start at the Forks/Point Douglas area and draw a series of ragged uneven concentric circles outward from there. Go north and east first, move westward then slowly south. Year after year, the increasing organization of streets, houses and services encroached into the wild land, eventually creating today’s still-evolving city.

In the 1920s, the area where Grant Park Shopping Centre, Grant Park High School and the Pan Am Pool are now was covered with bush. Area children used the meandering mazes through the dogwood, willow and saskatoon bushes as secret playgrounds. In 1908, the Grand Trunk Pacific Railroad had built a rail line along present-day Grant Avenue, cutting its own small swath.

Along a few mud trails hacked out of the bush on both sides of the tracks was Rooster Town, an unflattering name for a grim shantytown populated mainly by poor Metis families and transients. As the depression took hold after 1929, the city experienced a large influx of Métis, virtually the last group to move into Winnipeg until after the Second World War. Some of the Metis settled in the Dagmar District; others built or bought shacks in Rooster Town far past the streetcar’s last stop, even past the last road allowance. The Metis were among the first and among the last residents of Rooster Town. At most, there were probably 40 or 50 families living in Rooster Town.

The significance of the branch line of Grand Trunk Pacific to Rooster Town was twofold. It provided transportation in and out of Rooster Town during its 30-year existence. Steam trains needed water so they stopped at a water tower at present-day Grant and Guelph to fill up, making it an easy jumping off point for transients, hoboes and drifters with all manner of alibis. Rooster Town usually had a few shadowy nameless figures “just passing through.”

Transport wasn’t the only thing the railway offered Rooster Town. It also provided housing. GTP sold old boxcars cheap. The new owners hauled them off into the bush and set them up as houses. Some lived in them; others rented them for $18 a month. Constructed of uninsulated, weathered dry wood, the railcars quickly became tinderboxes. Used as houses, many tragic fires resulted. Other housing consisted of saltboxes, sheds and crude shacks with blackened shiplap walls and tarpaper roofs, poorly constructed from salvaged materials. Winters were especially cruel in these inadequate buildings.

One standing pipe for water, where Wilton meets Grant today, served all of Rooster Town. Water was hauled by hand, usually the role of the children. Even on the coldest winter days, they trudged the mile to the water spigot. Plumbing was strictly outdoors, bathtubs non-existent. 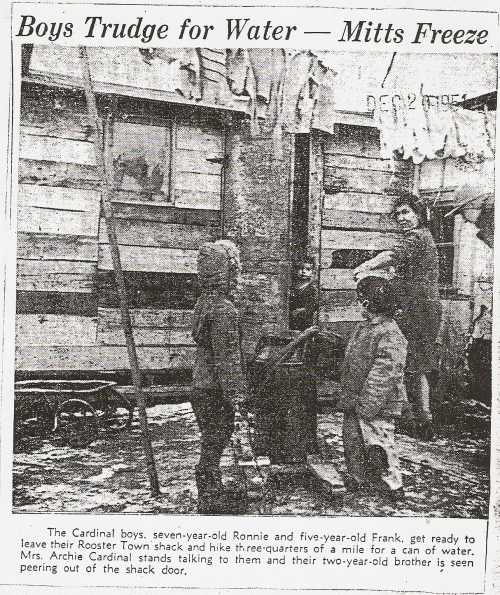 Above picture from Winnipeg Tribune December 20, 1951 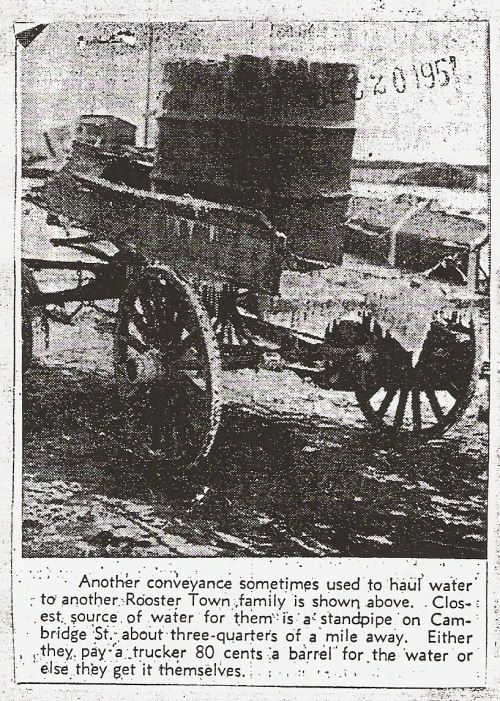 Above image from Winnipeg Tribune December 20, 1951

The lack of water meant sanitation was minimal. The poverty and crowded conditions of the shacks resulted on continuous waves of infectious disease sweeping through Rooster Town. Whooping cough and chicken pox were especially unforgiving among the children, impetigo and lice were common.

The name Rooster Town had two possible origins. It was common for families to raise a few chickens for eggs, which meant a chorus of cocks crowing welcomed every morning. Another source was the cockfights held there in its early days. Though the fine upstanding citizens of Winnipeg disparagingly named the area, there were more than a few such citizens, with a penchant for “betting the bird,” who snuck down to Rooster Town to wager on the cockfights, keeping the “sport” alive.

Ironically, Rooster Town had its own “suburb.” Tin Town, so named for the corrugated tin used in its equally squalid shanties, was located further south near present day McGillivray Blvd. In the summer baseball teams from the shantytowns competed.

During most of its existence, Rooster Town drew little attention from Winnipeggers. It was obscure and hidden in the bush, well away from their comfortable new houses. Viewed as a social problem by the media, none of the local newspapers gave the area much coverage, though the Winnipeg Tribune was more apt to report on it, especially when tragedy occurred.

Above image from Winnipeg Tribune December 24, 1951

Rooster Town was wiped off the face of the earth in 1959 during the reign of Winnipeg Mayor Stephen Juba. After WW2, development plans for the area were drawn up and the City began to expropriate the land. Some reports say people were forcibly removed, their houses burned and bulldozed. Some Rooster Town residents were unceremoniously relocated to a low-income housing development in the North End on Dufferin Avenue.

When construction began on Rockwood School in 1949, it was located on the northeast corner of Rooster Town and was the first opportunity for the children of Rooster Town to receive an education. In many ways, the school was viewed as a bastion against disease and lack of sanitation, similar in purpose and effect to the Little Nurses League in the 1920s and 30s. Metis children were often shunned due to the prevalence of disease especially impetigo. A typical warning of the time from parent to child was “Whatever you do, don’t touch the Rooster Town children. You might get a skin disease.”

Largely due to the presence of Rockwood School, the neighbourhood around the school became more organized and by the early 1960s, Rooster Town was gone, swallowed up by a spiffy new suburb of ratepayers – the middle class neighbourhoods spanning Crescentwood and River Heights and their amenities.